The Walt Disney Company announced plans today to build two additional cruise ships, each of them showcasing the immersive family entertainment, enchanting storytelling and unparalleled service that only Disney can deliver.

The company has entered into a memorandum of agreement with the Meyer Werft shipyard in Germany. The schedule calls for the new ships to be completed in 2021 and 2023.

“We pride ourselves on the unforgettable vacation experiences we deliver to our guests each and every day, and the expansion of our Disney fleet will allow us to create even more magical memories for families at sea and in incredible cruise destinations around the world,” said Robert A. Iger, Chairman and Chief Executive Officer, The Walt Disney Company.

Each new ship will be approximately 135,000 gross tons – slightly larger than the newest Disney Cruise Line ships, the Disney Dream and Disney Fantasy – and each is currently planned to include about 1,250 guest staterooms. While design plans, ship names and itineraries are still in development, the Walt Disney Imagineering team is already dreaming up exciting new ways to create the world’s most magical oceangoing adventures.

Since first setting sail in 1998, Disney Cruise Line has provided a quintessential family cruise vacation experience that combines the magic of Disney with the thrill of exploring different parts of the world. Guests step aboard majestic and beautiful ocean liners to enjoy legendary Disney entertainment, exquisite dining, spacious and well-appointed staterooms and magnificent public spaces.

The company also has been an industry leader in innovation and game-changing creativity. With the launch of the Disney Dream and Disney Fantasy in 2011 and 2012, the company introduced several firsts for the industry, including a water coaster at sea (AquaDuck) and virtual portholes in interior staterooms (Magical Portholes) that provide real-time views of the sea as well as sightings of animated Disney characters.

Plans for the expansion of Disney Cruise Line come during a period of momentous growth and innovation for Disney properties around the globe.

“The expansion of Disney Cruise Line only adds to our excitement for the unprecedented growth taking place across our vacation destinations, from new Star Wars experiences coming to the Walt Disney World and Disneyland resorts to the 25th anniversary of Disneyland Paris and the grand opening of our newest park, Shanghai Disney Resort,” said Bob Chapek, Chairman, Walt Disney Parks and Resorts.

More details about the Disney Cruise Line fleet expansion and onboard offerings will be announced at a later date.

Next Phase of Expansion Nearly Doubles Size of Fleet

Last year, the leader in family cruising announced plans to build two new ships at the Meyer Werft shipyard in Germany with scheduled completion dates of 2021 and 2023. The seventh ship will be built at the same shipyard and is scheduled to be completed in 2022.

“We decided two ships wouldn’t be enough to hold all of the exciting new experiences we have been dreaming up to take family cruise vacations to a whole new level with immersive Disney storytelling, world-class family entertainment, and imaginative innovations that are fantastically fun and uniquely Disney,” Chapek said. “By the time all three new ships are sailing, we’ll have nearly doubled the size of our existing fleet.”

All ship names, design plans and itineraries are still in development, with each of the ships expected to have their own unique experiences. The three new ships will be powered by clean-burning liquefied natural gas and be the same size – approximately 135,000 gross tons with about 1,250 guest staterooms planned – which is slightly larger than the newest Disney Cruise Line ships, the Disney Dream and Disney Fantasy.

Since first setting sail in 1998, Disney Cruise Line has provided a quintessential family cruise vacation experience that combines the magic of Disney with the wonder of exploring different parts of the world. Guests step aboard majestic and beautiful ocean liners to enjoy legendary Disney entertainment, exquisite dining, spacious and well-appointed staterooms and magnificent public spaces.

With the launch of the Disney Dream and Disney Fantasy in 2011 and 2012, the company introduced several firsts for the industry, including a water coaster at sea (AquaDuck) and virtual portholes in interior staterooms (Magical Portholes) that provide real-time views of the sea as well as sightings of animated Disney characters. With a legacy of revolutionary design, Disney Cruise Line’s new ships will usher in the next generation of innovative cruise experiences designed especially for families that will transform the art-of-cruising and take guests on adventures in a way never dreamed of before.

Disney Cruise Line has released the first rendering of its new generation of ships, with deliveries set for 2021, 2022 and 2023, respectively.
The ships will be powered by LNG with capacity for 2,500 passengers and will be 140,000 tons.
"In keeping with the distinct Disney Cruise Line style, the new ships will embody the elegance and romance of the golden age of ocean cruising with unique touches all their own. The new vessels will offer more innovation, new technologies, spectacular entertainment and more Disney stories and characters than ever before," the company said, in a statement.

At the D23 Expo 2019 today, Disney Parks, Experiences and Products Chairman Bob Chapek announced the highly anticipated name of the fifth Disney Cruise Line ship, gave us a first glance of the ship’s elegant atrium and revealed the iconic Disney character that will adorn the ship’s stern. Bob was joined by Imagineer Joe Rohde to share a first look at the plans for our second island destination in The Bahamas. I’m thrilled to share all these details with you!

Disney Wish was revealed as the name of our fifth ship. It’s very fitting because making wishes come true is at the heart of so many Disney stories. 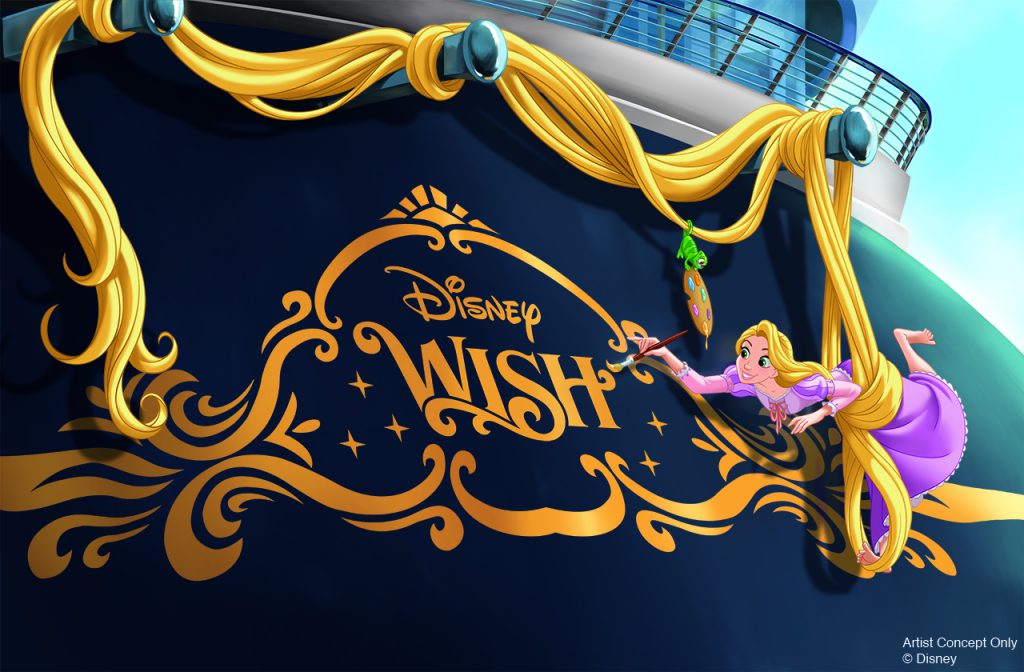 The ship’s atrium will be a bright, airy and elegant space inspired by the beauty of an enchanted fairytale. A beloved hallmark of Disney Cruise Line, it has been a tradition to adorn the back of our ships with an iconic character that reflects the theme of each vessel. For the Disney Wish, the ship’s stern will feature Rapunzel. Our favorite artsy princess, paintbrush in hand, uses her enchanted hair to suspend herself as she decorates the stern of the ship with the help of her feisty sidekick, Pascal. Spirited, smart, curious and above all, adventurous, Rapunzel embodies the wish and desire to see and experience the world. 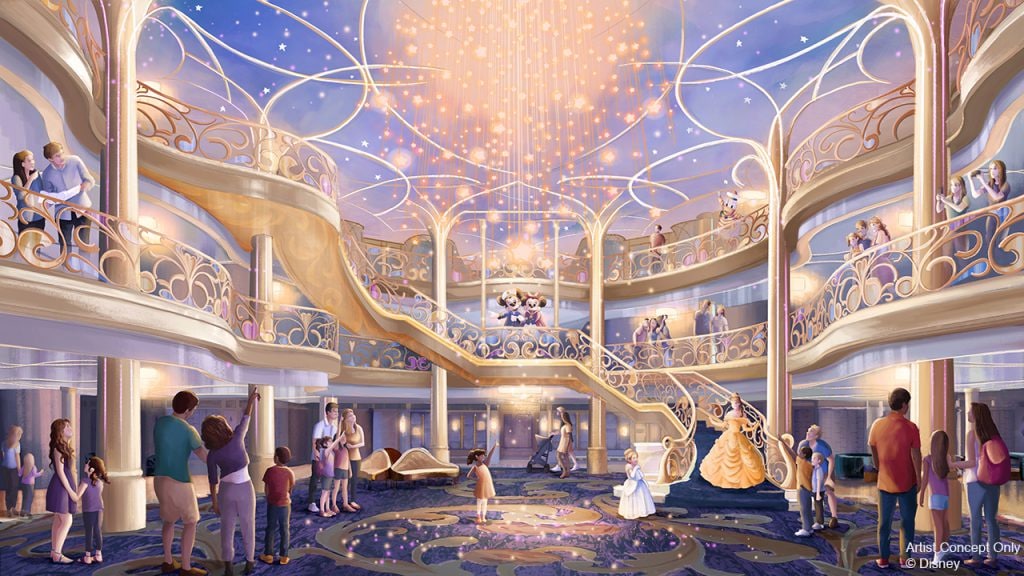 The Disney Wish is scheduled for delivery in late 2021 and will set sail in January 2022. The vessel will join Disney Cruise Line’s award-winning fleet where guests experience the magic of Disney entertainment combined with the relaxation of tropical, sun-drenched beaches and the adventure of ocean cruising. All three new ships will be powered by liquefied natural gas and, at approximately 144,000 gross tons and 1,250 guest staterooms, be slightly larger than the Disney Dream and Disney Fantasy.

With three new ships coming to the Disney Cruise Line fleet, there’s so much to look forward to on the high seas and at the new Disney tropical destination experience in The Bahamas. Stay tuned here to the Disney Parks Blog as we look forward to sharing more exciting details with you in the future!

Staff member
This three will be called the "Triton class"