Staff member
Australian shipbuilder Austal Limited has confirmed that it is in discussions for a ferry order from the Government of Trinidad and Tobago.

The confirmation comes on the back of the announcement by the Prime Minister of Trinidad and Tobago that the nation’s cabinet authorised the purchase of a fast ferry from Austal.

The company said that it “looks forward to negotiating and resolving terms for the purchase of this vessel as quickly as possible.”

“In the meantime, this initial announcement will trigger the release of a down payment which will allow design of the vessel to commence and for initial long lead materials to be procured.”

Contract finalisation is not expected for several weeks, the company concluded.

AUSTAL (ASX:ASB) is pleased to announce it has entered into a circa AU$97,700,000 million contract with the National Infrastructure Development Company (NIDCO) which is owned by the Government of the Republic of Trinidad and Tobago’s (GORTT). The contract is for Austal to design and build a 94metre high speed vehicle and passenger catamaran to be delivered in mid-2020. The ship, designated 94m AutoExpress, will provide high speed passenger and vehicle operations on the key sea bridge between the islands of Trinidad and Tobago.

The vessel is a derivative of the two 109metre AutoExpress ships designed in the last 2 years by Austal following an intensive development program and therefore incorporates many of the same design features which have made these vessels class leading.

The 94m AutoExpress ship design is being undertaken in Australia and is already well advanced which has allowed initial construction to commence. The ship will be built in Austal’s new shipyard in Vung Tau, Vietnam. This new facility commenced operations on 1st November this year and has already successfully delivered large aluminium modules for a 109 metre catamaran being built in the Philippines. It is supported by Austal’s extensive global supply chain featuring more than 1,100 Australian SME’s. As a result of the new contract, Austal now expects that the new shipyard in Vietnam will be profitable in its first year of operations and will quickly expand to over 450 people from just under 100 employed currently.

The 94m AutoExpress is designed to carry 926 passengers and 250 cars at speeds of 37.5 knots and will operate a daily service between the islands of Trinidad and Tobago. The ship will also feature Austal’s newly developed and industry leading innovation in smart ship technology, MarineLink Smart.
Page 2 of 3

“The development of the new AutoExpress design was initiated in early 2016 and has proven to be a great success which has now resulted in ship contracts worth approximately AU$300 million. We remain committed to developing the most advanced high speed aluminium ships in the world further exemplified by the sale of 3 new trimarans, previously announced, which are currently in the construction phase.

We are delighted that the Government of Trinidad and Tobago have selected Austal as their partner to design and build this next-generation vessel. This new contract will build upon the Austal fleet already in Trinidad which includes four 41metre catamaran Water Taxis and six, 30 metre, monohull fast patrol craft.” Austal CEO, David Singleton said.

Austal Vice President of Sales and Marketing, Ben Marland, added “Since late 2016, I have been remarking on the strength of the international high speed aluminium ferry market, which has already delivered a record future order book for Austal. This order will add to the global fleet of over 300 Austal vessels already in operation” he said.

This contract follows an initial announcement by the Government of Trinidad and Tobago reported in September of this year. Subsequently NIDCO funded a limited program of early works to protect the delivery schedule of the vessel. This has allowed for the necessary design changes to the vessel to be undertaken and in addition for some advanced materials to initiate construction. NIDCO intend to finance the vessel through an export loan from Australia’s Export Finance and Insurance Corporation (EFIC).

Austal’s current large ship contracts include two 109 metre catamarans for Molslinjen of Denmark and Fjord Line of Norway, two117 metre trimarans for Fred Olsen S.A. of the Canary Islands, and a 82 metre trimaran for JR Kyushu of Japan. This is in addition to programs for the United States Navy, where both an Austal designed trimaran, the Littoral Combat Ship (LCS) is in full rate of production together with the Austal designed catamaran the Expeditionary Fast Transport (EPF). Austal currently has more than 48 vessels either in build or design across shipyard operations in the United States, Australia, Philippines, Vietnam and China. 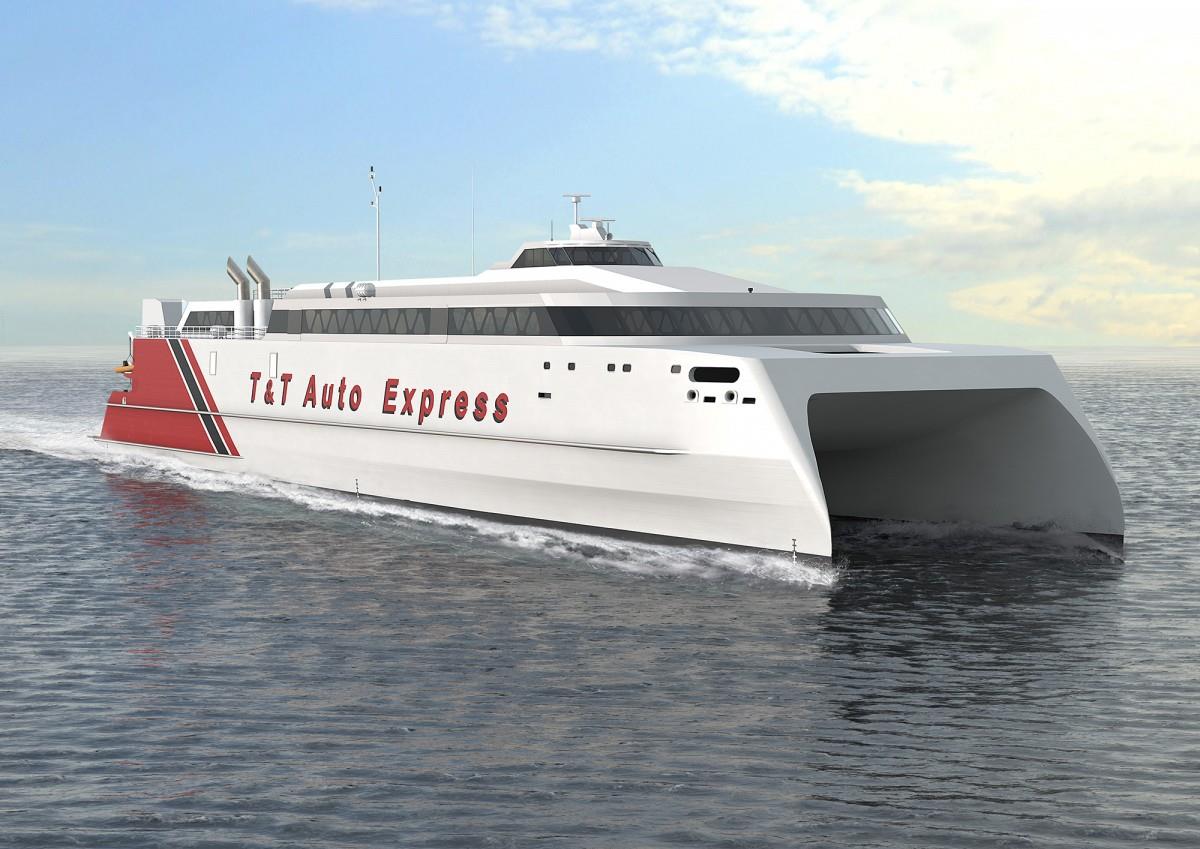 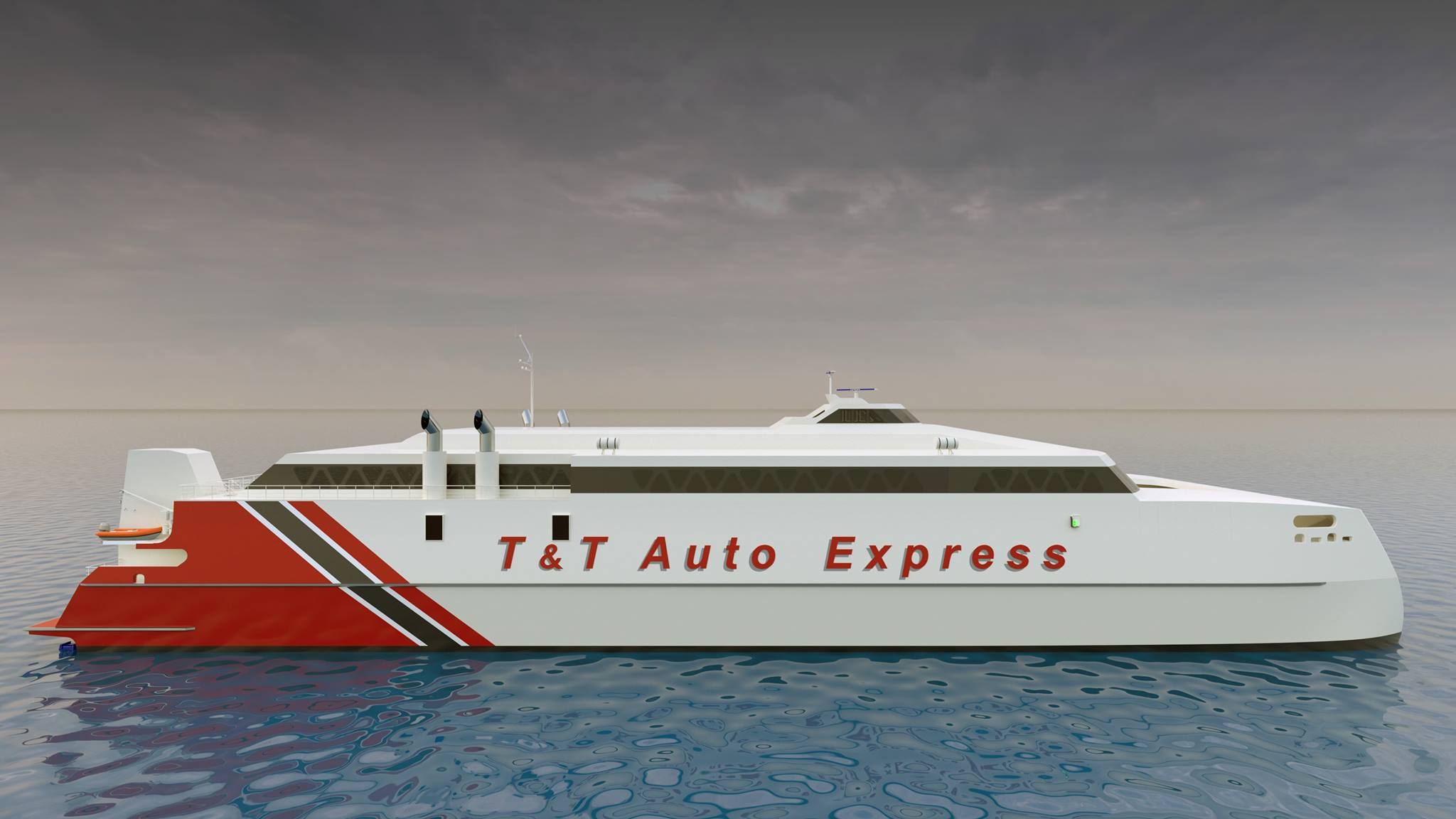 Austal Vietnam is proud to announce the launch of our very first vessel, Hull 397 - the APT James for the National Infrastructure Development Company of the Republic of Trinidad and Tobago.

The 94-meter high-speed passenger passenger ferry, an Austal Auto Express 94, is an all-new aluminum catamaran that will carry 926 passengers and 250 cars at speeds up to 37.5 knots when it commences operation between the islands of Trinidad and Tobago in the Caribbean Sea, in the second half of 2020.

The Austal Vietnam team of 450 employees has grown quickly since establishment in Vung Tau in March 2018, constructing this impressive new ship to industry-leading quality in just 20 months.

The 94 metre high-speed vehicle passenger ferry, an Austal Auto Express 94, is an all new aluminium catamaran that will carry 926 passengers and 250 cars at speeds up to 37.5 knots, when it commences operation between the islands of Trinidad and Tobago in the Caribbean Sea, in the second half of...