Project 170701 is an advanced design, both for Russia and for the global fishing industry.

New trawlers will have a capsula-type hull of over 80 m long. 3,500 GRT ships will be equipped with fish processing plants allowing for production of more than 21 t of cod and haddock fillet as well as at least 7 t of fish flour per day. Besides, they will process halibut and ocean perch. Freezing equipment of each trawler will have the capacity of more than 60 t of product per day.

Norebo management is going to include the projects for construction of six trawlers into the application for investment quotas this year. The new ships are supposed to be used in the Northern basin.

Norebo investments into its fleet renovation through construction of ships at Russian shipyard will total more than RUB 21 bln. Keel-laying of the first ship is scheduled for the third quarter of 2018. Severnaya Verf should is planning the development of design and production documentation together with a Russian design bureau.

According to Igor Ponomarev, Director General of Severnaya Verf, all trawlers are to be built by 2023.

Established in 1997, Norebo is one of Russia’s three largest fishing companies. The group numbers 13 fishing companies in the North-West Region and in the Far East of Russia. The group’s fleet consists of over 40 medium-size and large-size fishing ships operating in all key fishing areas of the Atlantic and Pacific Oceans. In 2016, Norebo vessels caught more than 500,000 t of fish. With its head office in Murmansk, Norebo sells its products both in Russia and in the foreign markets.

Russian fishing company Norebo Group has placed an order for six new freezer trawlers to be built at the Severnaya Verf (Northern shipyard) in St Petersburg in Russia and the company has opted for innovative designs from Icelandic design company Nautic, one of the Knarr Maritime group of companies.

The 81m LOA by 16m beam factory trawlers are destined for Norebo’s fishing companies operating in the north Atlantic and feature the distinctive inverted Enduro Bow design. Each will have a processing capacity of not less than 21 tonnes per day of fillet production or a 60 tonne per day H&G production, in addition to production on board of fishmeal and liver for canning.

Norebo is a conglomerate of 13 fishing companies in Russia with activities both in Atlantic and Pacific oceans, as well as other companies in fish processing, logistics and sales. The deal with Severnaya for building of these state-of-the-art vessels has been struck with five of the companies within the group; Rybprominvest JSC, Karat-1 JSC, Alternativa JSC, Karelian Seafood JSC and Murmansk Region Fleet JSC.

‘We have put a great deal of effort into preparing this project with Norebo Group in the last few months, as well as developing further projects in both north-western and Far Eastern regions of Russia,’ said Nautic’s managing director Alfreð Tulinius.

‘These are outstandingly sophisticated fishing vessels designed to operate in the unforgiving conditions of the north Atlantic and will be capable of a level of production at sea that is entirely new. We are looking forward to working with Norebo’s team and Severnaya Verf as the project moves forward. The technical documentation will be adapted to Russian requirements and finalised by a Russian-based designing company while theR03; construction is scheduled to start at the yard in third quarter of the next year and the series as a whole is expected to be complete by 2023,’ he said.

‘We made a strategic decision to invest in the construction of modern and progressive fishing vessels of this design,’ commented Vitaly Orlov, Director of Norebo Management LLC and owner of Norebo Group.

‘For us it is important that vessels of such complex design and construction should be built by a Russian shipyard with more than a century of history. The new trawlers are designed to work under harsh conditions of the Arctic region and they will produce a variety of high-quality products,’ he said, adding that it is highly satisfactory for the company to be making its own contribution to the revival of shipbuilding in Russia. 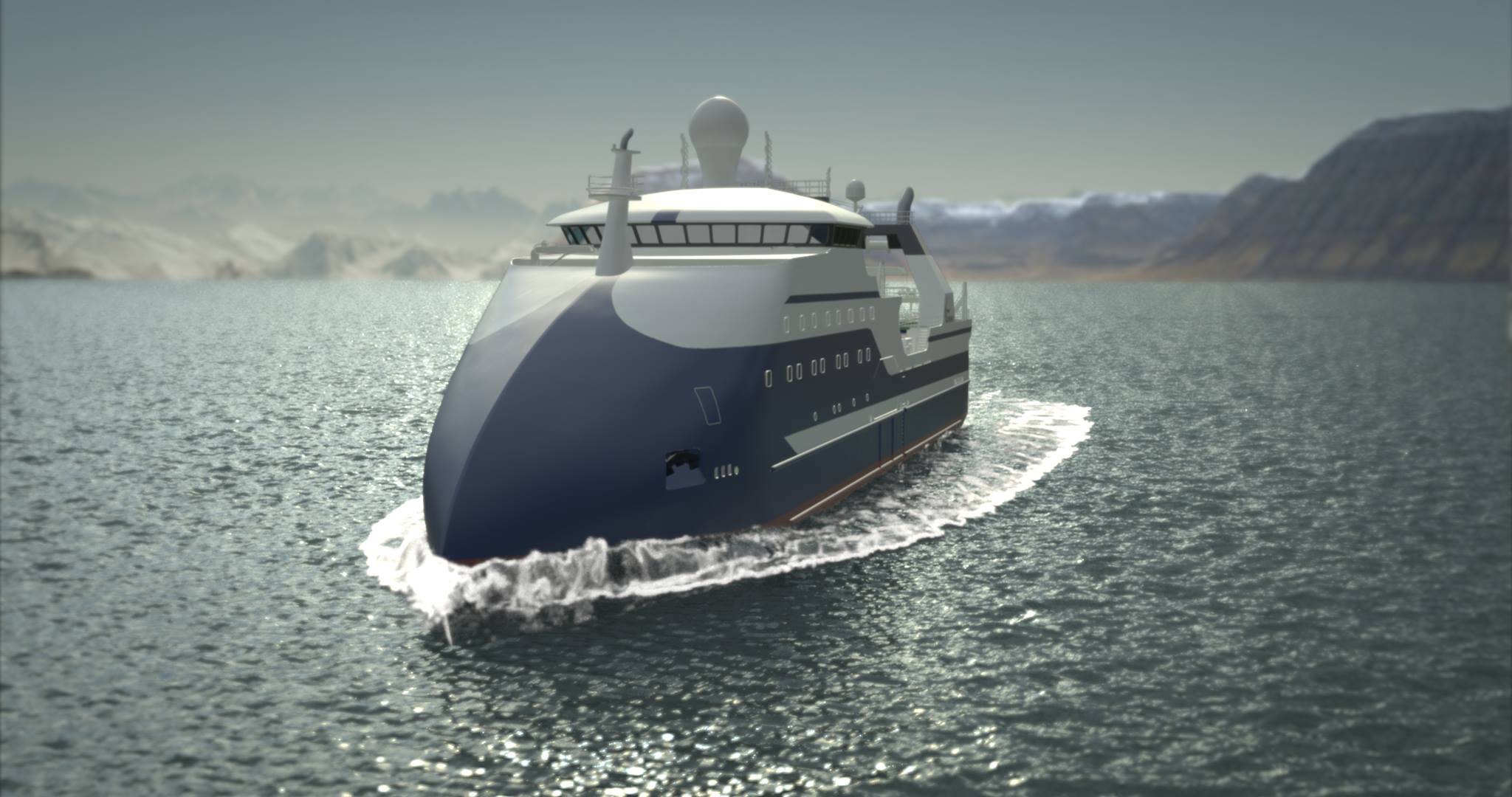 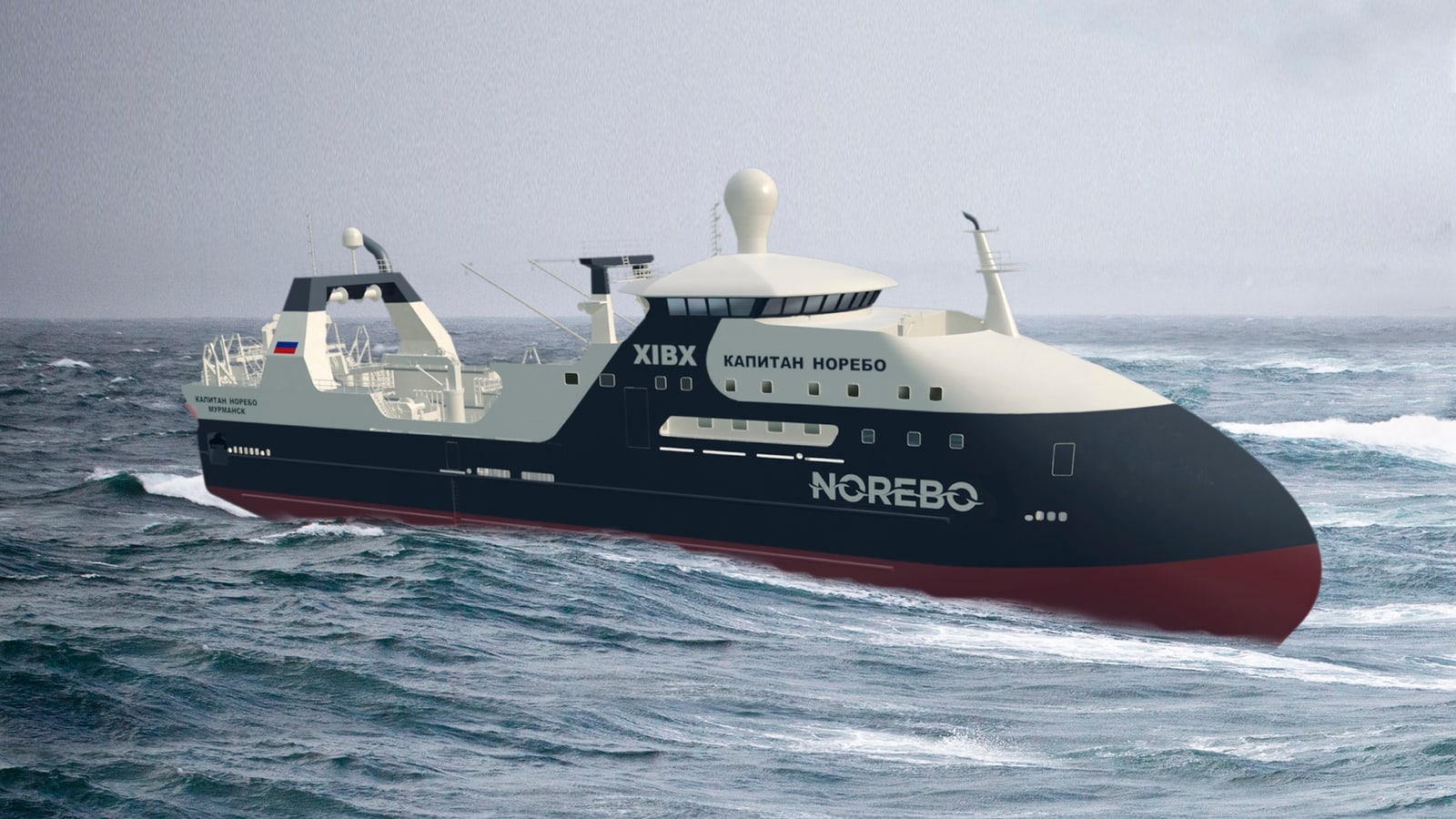 Severnaya Verf shipyard shipping company Norebo, one of Russia’s leaders in the industry, agreed on construction of four more processing trawlers of Project 170701. Thus, the series has been extended to 10 units, says the shipyard.

Under the contract, Severnaya Verf shipyard will build processing trawlers for Akros JSC, Blaf JSC, Roliz LLC and Sakhalin Leasing Fleet JSC (companies of Norebo Holding headed by Aleksandr Isakov). Each ship will cost over RUB 4 billion. They are to be delivered to the customer between 2020 and 2023.

Ships of 170701 design provide for the most advanced fishing and processing technologies. The plant’s capacity is almost 1,200 tonnes of frozen fish (or 1,020 tonnes of fish and 334 tonnes of fish meal. Besides, storage capacity of the trawler is 95 tonnes of canned fish.

Aleksandr Isakov said that the trawlers will be deployed for catching pollock and herring in the Far East fishing basin: Okhotsk and Bering seas. He emphasized that Norebo had been implementing the fleet renovation programme from 2017.

The construction of trawlers of Project 170701 is financed by own resources of Norebo with the financial support of Sberbank of Russia allowing for long investments in upgrading Russia’s fishing fleet.

According to Igor Ponomarev, Director General of Severnaya Verf, “The shipyard is interested in large series of ships numbering 6-10 units. That ensures optimization of expenses for designing, construction, procurement of equipment”, he said. 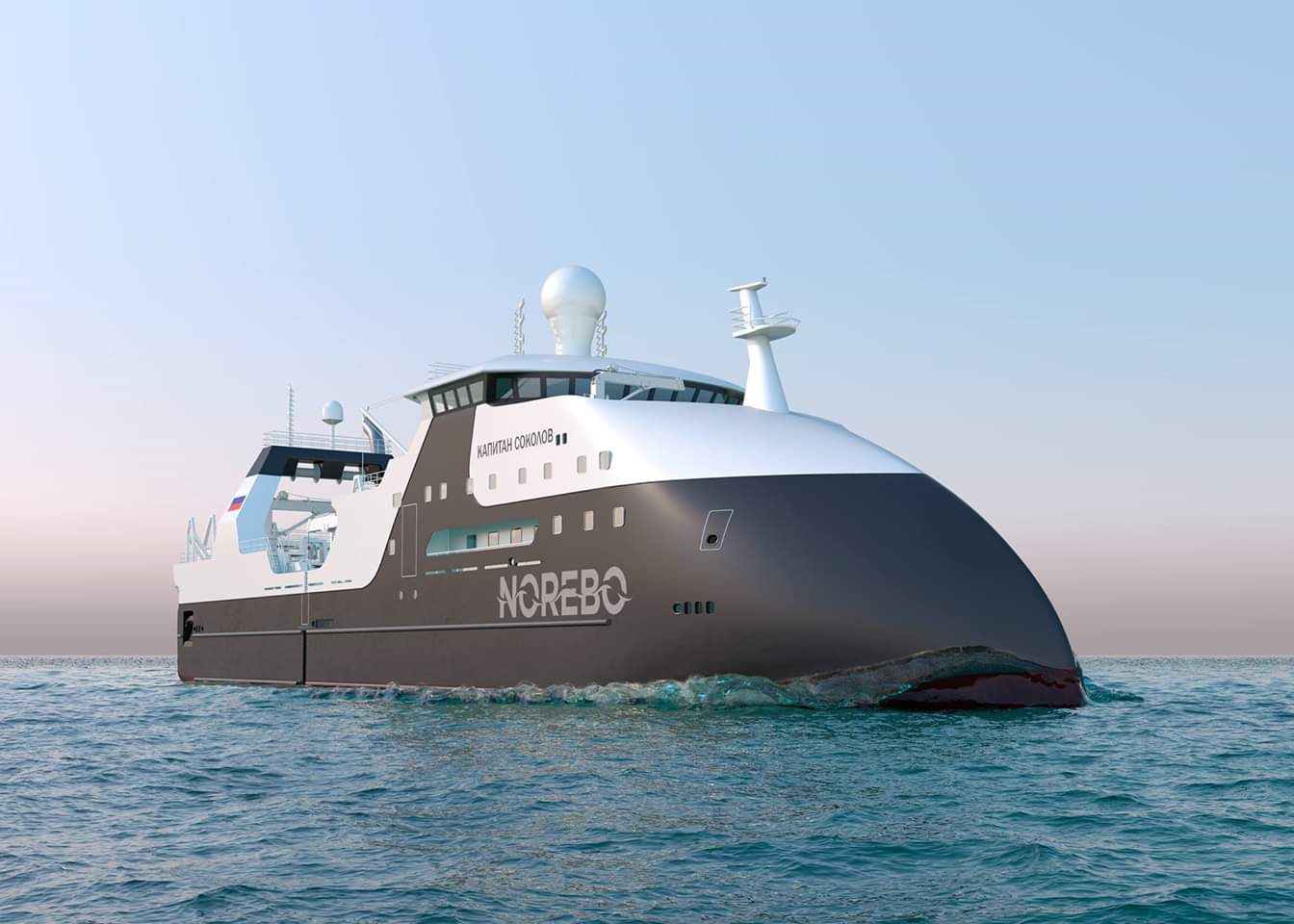 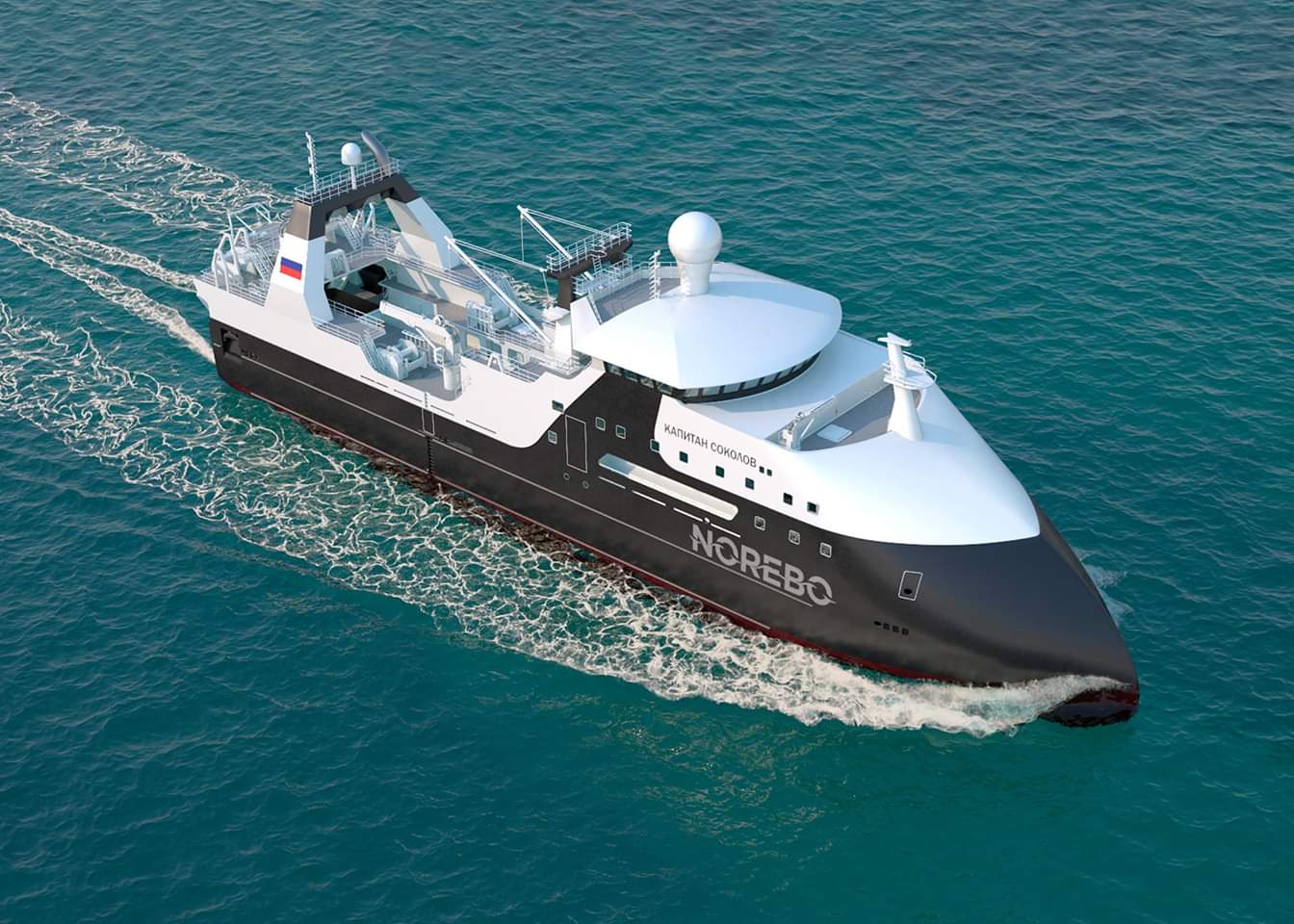 Construction work has begun on the second in the series of new factory trawlers for Russian fishing group Norebo, with the keel laid at the Severnaya (Northern) Shipyard in St Petersburg.


The first of the series in taking shape since its keel was laid in November last year, and both of these trawlers are being built for Norebo’s Rybprominvest company.

The second trawler has been named Kapitan Geller after Stanislav Iosifovich Geller (1936-2006) who was a well-known figure in the Murmansk fishing fleet.

The Svernaya Shipyard’s managing director Igor Ponomarev said that while the initial contract with Norebo was for four vessels, this has since been extended to ten.

‘This is the largest series of vessels to be built in the yard’s recent history,’ he said, commenting that serial construction provides opportunities for added efficiencies in production.

The shipyard currently has fourteen fishing vessels on its orderbook. In addition to the series of ten Noreo trawlers, Severnaya Shipyard is also building the Gandvik 1, 2and 3 longliners for Virma, and longliner Marlin for Globus.