Nordic Cruise Company is moving ahead with its plans to build a series of four expedition ultra luxury yachts, according to Ulf Henrick Wynnsdale, president and CEO.

The first ship will be delivered in May of 2020, Wynnsdale told Cruise Industry News. Three more 220-passenger vessels will follow from Spain’s MetalShips & Docks in 10-month intervals.

A significant amount of fundraising for the project is complete.

The four ships will be the first expedition ships that are LNG ready, with capacity to sail up to 36 hours on LNG while burning MGO the rest of the time. They will also be equipped with hydrogen fuel cells, said Wynnsdale.

Since an initial ship concept was released in January, the company went back to the drawing board, adding capacity, making the ships bigger at 16,500 tons and giving them a totally new exterior look, courtesy of Hareide Design, which drew up a new vessel stance and incorporated much more glass into the ship’s design.

“The GA we have now is probably the ninth or tenth version. It’s been changing. We are not going to jump into this and develop a ship that is not top of the line,” Wynnsdale said. “In January, we introduced the concept of an ultra luxury yacht with some expedition capabilities.”

Now, the vessel is an expedition ship, while retaining the mega yacht look. A sales plan is being formulated with David Morris International and the company plans to target the high-end of the U.S. source market. Multiple focus groups have been held across the U.S.

A hotel partner that will lend its name to the operation is still in the cards, Wynnsdale said.

“I am confident that with the expedition vessels entering the market, the demand is more for luxury and exploration, and the onboard experience is going to be just as important as the destination.”

Most staterooms will offer so-called infinity-style balconies. There will also be a top-deck observation lounge and large aft marina. Absent will be helicopters and submarines.

Being the first LNG-powered expedition ship, Nordic Cruise Company is on a mission to be green, also including fuel cells and battery power.

DNV GL has signed on as the class society. Wynnsdale said battery power would supplement two main engines during peak periods of demand, so a third would not have to kick in. The vessel will have four main engines.

Wynnsdale said that after a thorough review process, the company will construct the vessels at MetalShips & Docks in Spain, which has specialized in both mega yachts and offshore vessels. The yard and the shipowner have been talking for a full year. Wynnsdale added that there was little capacity for cruise-ship building in Norway and the Chinese yards he held talks with would have had challenges delivering a luxury product.

Since announcing its intent to enter the business in January, there has also been a slight branding adjustment – as Norwegian Cruise Company has become Nordic Cruise Company. The startup is also promising to be the “Ultra Luxury Green Expedition Cruise Line.”

Expect further branding changes before sales and marketing kick into high gear, with or without the addition of a hotel partner.

“We plan to stay far away from the word cruise ship,” Wynnsdale explained. “There are so many people that have a totally wrong picture of what cruising is all about. Expedition and voyages will sound much better.” 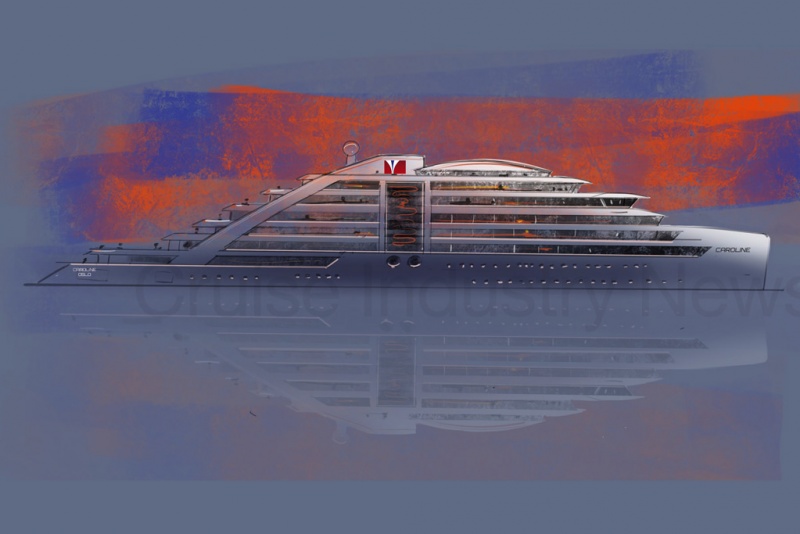 Norwegian Yacht Voyages is moving ahead with a finalized ship design, according to a company statement. The start-up aims to build four small luxury cruise yachts and has since rebranded from Nordic Cruise Company. The first ship will sail as the M/Y Caroline.

The ships will be 173.8 meters long, with a guest capacity of 220 persons. Suite sizes will range from 485 square feet to 1,506 square feet, the company said. There will be 160 crew aboard the LNG-powered ships, which will also feature hydrogen fuel cells and battery banks.

"We are convinced that our extreme focus on sustainable sea travel and our new innovative solutions will be raising the bar for new stricter regulations for sea travel, not only in environmental-sensitive areas but on all seas around the world," said Ulf Henrick Wynnsdale, president and CEO.

"While many claim to be hybrid vessels, they are mostly referring to their installed battery banks forso called peak-shaving," he continued. "Peak-shaving is where batteries give the extra energy needed at times, rather than additional diesel generators be required to start up, hence reducing emissions. However, these hybrid vessel would never be able to operate without some diesel generator(s) running."

Plans call for building some four vessels at MetalShips & Docks in 10-month intervals. Among other project partners are CMI Leisure and CMI Ship Management.

I saw some Facebook posts from Norwegian Yacht Voyages, which suggest that they are now talking to Navantia as yard rather than Metalships....

NORWEGIAN YACHT VOYAGES IS GEARING UP

Helge R Naarstad has put his mark on many of the most famous cruise ships in the world. Now he will continue doing so as he takes on the role as Chairman of the Board of Norwegian Yacht Voyages AS (NYV). As President of Norwegian Caribbean Cruise Line (NCL), he introduced the new megatrend in cruise-ships. He then created the most luxurious cruise-product in the form of Sea Goddess I and II, invented the all-inclusive concept, along with a lot of new developments that have become standards in the cruise industry today.

Since January 2017 Norwegian Yacht Voyages has been developing its new Expedition Concepts and new Mega Yacht design. Einar Hareide, an award-winning Norwegian industrial designer most known as the Design Director of SAAB motor cars for 15 years, is the mastermind behind this design.

Petter Yran is a Norwegian cruise ship designer and a veteran in the industry. Having designed ships for Regent Seven Seas, Seabourn, Silversea, Holland America Line, RCCL and Disney to mention a few, is now bringing his expertise to NYV. Rated one of the World's most experienced and well-renowned cruise ship architects and engineers, Deltamarin will make sure all the technical and engineering parts of the mega yachts, such as their innovative environmentally-friendly solutions are being built to the highest quality and safety standards.

An online crew portal for both crew applications and future crew is now live at crew.norwegianyachtvoyages.com (or noryv.com/crew).

To learn more about:

rd77 said:
I saw some Facebook posts from Norwegian Yacht Voyages, which suggest that they are now talking to Navantia as yard rather than Metalships....
Click to expand...

Hello and first of all thank you for your interest in NYV and for following us in media.

It is correct that we are not talking with MetalShips any longer and that we are now in negotiations with Navantia. There are several reasons for this but our project had become to big both with regards to the size of our ships and the financial capability to MetalShips.

With a LOA of 188 meter there are not many yards in Spain large enough for us.

This is our final design

Staff member
Is it MT design from Marin Teknikk?

It is correct that we were working with Marin Teknikk on our project, and that it then was called MT5015. However, we are not working with Marin Teknikk any longer, as Petter Yran and Deltamarin have taken on the roles as architect, naval architects and naval engineers. Einar Hareide of Hareide Design is still our designer and the mastermind behind our exterior design. Our first newbuild is now designated number NYV01 with NYV02, 03 and 04 soon to follow.
Last edited: Jun 22, 2018

Ulf, many thanks for your updates on this, appreciate the openness. Would be a nice breakthrough for Navantia in the cruise segment. They are a large and very reputable yard who could likely pull this off successfully. They would certainly love to regain their footprint in civil shipbuilding as they have been limited for many years mainly to naval shipbuilding and ship repair.

Hi again and you are most welcome. Thanks to all of you who is following us on this super exciting voyage. My transparency philosophy has often been quoted in media and I truly believe that transparency is one of the key factors to build brand loyalty, it being from guests, crew or partners. In an industry full of NDAs I know this is unusual, but then we like to do things differently, which will reflect on our ships too. Enjoy your weekend everyone!

According to Norwegian Yacht Voyages, M/Y Caroline will be both the world's first true hybrid expedition mega-yacht and, at 187.50 m long, the world's largest.

The Polar Class 6 mega yacht will have a hybrid machinery solution consisting of dual fuel generators that can run on both diesel and LNG, energy storage for peak-shaving and several other solutions to minimize emissions. Guest capacity will be approximately 220 persons in 110 suites and penthouses, with ultra-luxury public spaces. The yacht will operate worldwide giving a unique onboard experience with a focus on sustainable sea travel and low environmental impact.

Deltamarin will provide conceptual design together with selected architect partners, covering the development of the technical design and documentation.

"We are very proud to announce our partnership with Norwegian Yacht Voyages to develop this ambitious project, which is to be the greenest mega yacht we have seen to date. Deltamarin has an excellent track record of designing highly energy-efficient and environmentally-friendly passenger vessels, so we are very excited to join this project," says Deltamarin's Sales Manager Jaakko Lappi.

Hi Sindre, no I think he missed his window of opportunity. On the other hand, I think the small super luxury/expedition segment of the cruise industry could be the only one with some real potential in the next few years. Max 200-300 pax is quite controllable and these luxury ship have a good space ratio (social distancing possible). We will see, but Norwegian Yacht Voyages is end of story I would say.
You must log in or register to reply here.
Share:
Facebook Twitter Reddit Pinterest Tumblr WhatsApp Email Share Link
Top