Siem Offshore has agreed with the charter to extend the firm contract for 3 x large AHTS vessels (Anchor Handling Tug Supply vessels) operating in Australia. The extension will secure work until October 2021 for all 3 AHTS vessels with options until end of 2022.

GC Rieber Shipping ASA is pleased to announce a new short-term contract, for three weeks with further options to extend, for the walk-to-work vessel Polar Queen for a Tier 1 client in Europe for work in an offshore wind park. Polar Queen is currently mobilising for the project and will commence the charter tomorrow.

The charter is in direct continuation of the vessel's previous five-month charter, also in the walk-to-work market. The back to back charter arrangement shows the vessel's attractiveness in the market and ability to secure new charters and clients.

GC Rieber Shipping ASA is pleased to announce a two-year extension for the icebreaker Polar Pevek. The extension follows from end of the firm period in September 2021, making the vessel firm until September 2023. Polar Pevek is a customised heavy icebreaker and commenced her original charter in 2006 on what originally was a 15-year charter. The vessel is operating off Sakhalin Island, in far east Russia.

"We are proud to secure multiple years of extension so far in advance completion of the contract. It's an acknowledgement of the vessel's unique characteristics and our operational performance. We look forward to continuing our good and close cooperation with our client together with our partners", Christoffer Knudsen, CCO, commented.

"We recently announced a shift in the company's strategy with an increased focus on project developments of sustainable maritime projects. The extension is a recognition of that one of our core legacy projects creates value to our client more than 17 years after its beginning. It's a true testament to our significant development potential", Einar Ytredal, CEO, commented.

DOF Subsea has been awarded an integrated Field Support Vessel (FSV) contract with an international oil company in Angola. The project shall utilize Skandi Seven for a minimum of 303 firm vessel days plus 365 days of options. The Contract also includes the potential supply of additional vessels, as required by client.

DOF Subsea shall during the project deliver integrated FSV services, project management, engineering, procurement and logistics within deep-water construction and maintenance of existing subsea assets. Work packages under the contract shall also include services for transportation and installation of flexible products and various subsea equipment.

Mons S. Aase, CEO, DOF Subsea said, "I am pleased that DOF Subsea is trusted with another contract in Angola. This project will secure utilization for our integrated FSV team and assets, strengthening our position as a leading one-stop solutions provider for integrated subsea operations across multiple disciplines. DOF Subsea is continuously working to develop efficient services without compromise to safety."

GC Rieber Shipping ASA's 19% owned geoservices company Shearwater GeoServices Holding AS ("Shearwater") today announced the award of a large towed streamer 3D seismic survey for Block 52, offshore Suriname by PETRONAS Suriname E&P B.V. (PSEPBV), a subsidiary of PETRONAS. PETRONAS is an integrated global energy company and the Americas is one of the regions the company is focusing on. The four-month project is scheduled to commence in Q4, 2020.

The 3D seismic survey covers surface area of 6,200 sq. km in Suriname's Block 52 and will be carried out by the Geo Caribbean vessel. PSEPBV is the operator of Block 52 with 50% participating interest together with partner, ExxonMobil holding the remaining 50%.

DOF Subsea have been awarded two contracts in the Asia Pacific region, securing backlog for the onshore team and offshore fleet. The first project involves saturation diving and will see Skandi Singapore deployed for 3 to 4 weeks starting early Q4 2020.

The second award is for onshore preparation and planning for a decommissioning project which, with further possibility for offshore work in 2021.

Mons S. Aase, CEO, DOF Subsea said, "I am pleased that that we continue to build backlog for the region and that DOF Subsea is a trusted provider for integrated subsea operations across multiple disciplines. DOF Subsea is continuously working to develop efficient services without compromise to safety."

The award includes Project Management, Engineering, Transportation and Installation Services and is expected to be completed during Q3 2021. The project will utilise the DSV Skandi Singapore, which, with an in-built saturation diving system and 140Te AHC crane, is ideally suited to these operations.

Mons Aase, CEO DOF Subsea AS, said, "We look forward to working with Woodside to deliver safe and efficient award."

In addition, as part of the Frame Agreement between Aker BP ASA and Solstad, Aker BP ASA has extended present contract for the PSV Far Solitaire with 12 months, commencing 1st January 2021.

Both vessels will continue to support the oil & gas activities on the Norwegian Continental Shelf.

Equinor Energy AS has declared an option to extend the firm period of Skandi Vega from 6 months to 2 years, and the vessel will be firm until May 2022.

Skandi Vega has worked continuously with Equinor since 2010.

Reference is made to Solstad Offshore ASA's ("SOFF") stock exchange notice dated 17 September 2020 in which it was advised that Saipem (Portugal) Comercio Maritimo ("Saipem") had early terminated the time charter for "Normand Maximus".

The time charter for "Normand Maximus" entitled Saipem to terminate the charterparty for convenience against payment of an early termination fee to SOFF's wholly owned subsidiary Normand Maximus Operations Limited (the "SOFF Subsidiary") as disponent owner of "Normand Maximus".

Normand Maximus is financed under a financial lease entered into between Maximus Limited as owner of "Normand Maximus" and the SOFF Subsidiary as bareboat charterer.

The financial lease is guaranteed by SOFF and includes customary prepayment events and default provisions. These may i.a require the SOFF Subsidiary to purchase the vessel if the SOFF Subsidiary is not able to secure new employment for the vessel. The vessel is one of the largest and most sophisticated vessels within its segment and SOFF expects that the vessel will be engaged on new projects within reasonable time. SOFF and the SOFF Subsidiary are exploring the market opportunities and is now engaging in dialogue with the leasing company Maximus Limited with a view to agree on a solution for the financial lease taking into account the early termination by Saipem.

It is not expected that the completion of the restructuring of the SOFF group to be considered by the general meeting of the Company on 20 October 2020 will be affected by the termination of the time charter contract.

Solstad Offshore ASA is pleased to confirm that the PSV Normand Skimmer has been awarded a significant long term contract with a major international company.

The 2012 built vessel of PSV 08CD design, has been contracted for a period of 5
years plus options to support operations offshore North Western Australia from
Q4 2020.

During the campaign the vessel will operate from Dampier, servicing production
activities in the region. 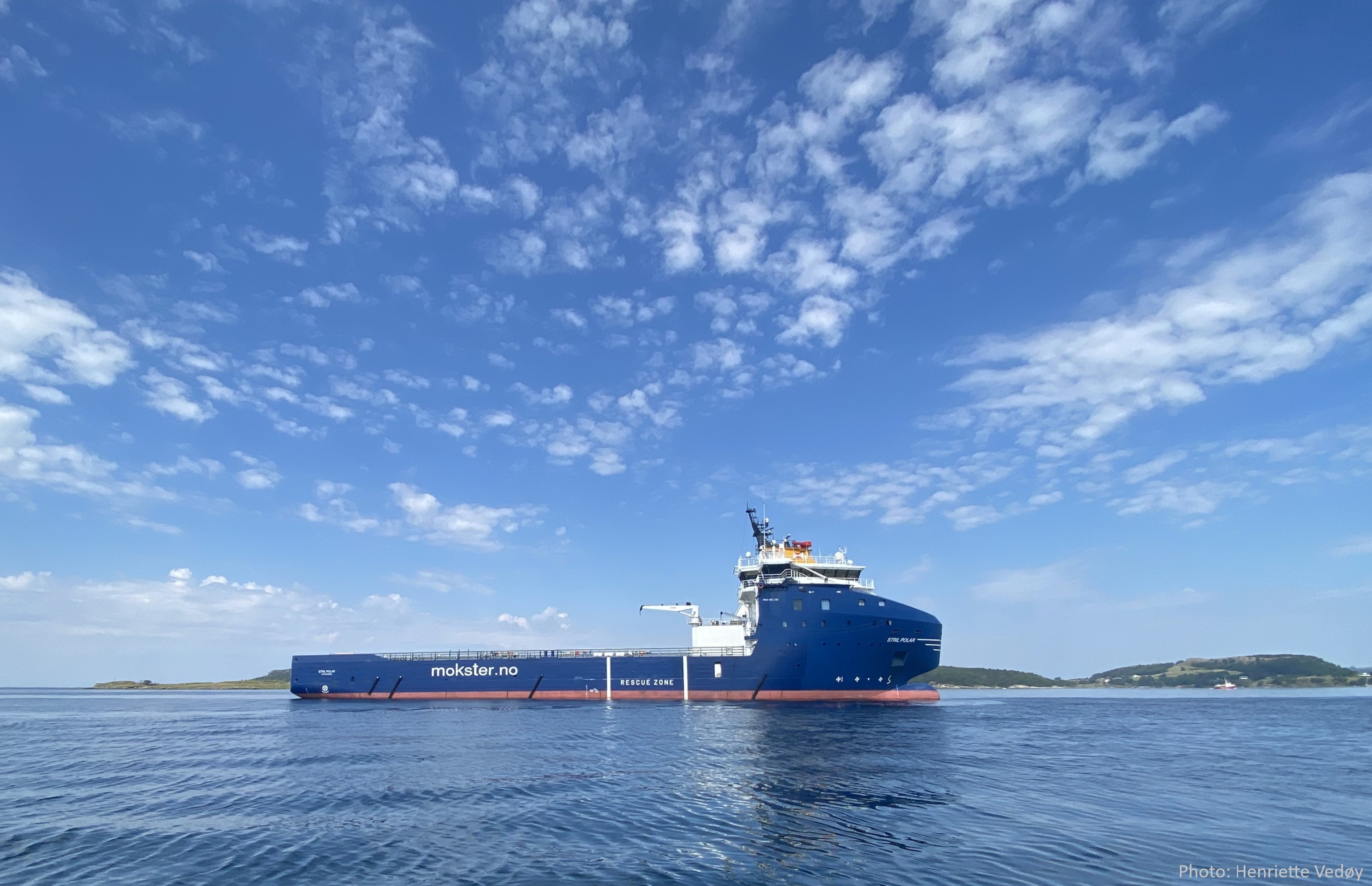 Møkster is pleased to announce that Aker BP has called-off the Stril Polar for a period of 12 months commencing January 2021. Stril Polar is a large modern PSV and has been employed by Aker BP for longer periods before. Møkster looks forward to continuing the PSV services for Aker BP as part of...

Staff member
DOF Subsea has been awarded a MPSV contract on the Mero Field in Brazil
The DOF Group is pleased to announce another contract award in Brazil for Libra Consortium, supporting Petrobras' operation activities on the Brazilian continental shelf.

Petrobras has awarded DOF Subsea a 3 years MPSV vessel contract for Mero field. Skandi Salvador is the vessel that will operate 2 x WROV for 24 hours providing inspection, maintenance and subsea commissioning services in water depths of up to 2,500m, including shallow dive services with Oceânica.

The contract reinforces DOF's strategic positioning in the Brazilian market. Since June 2020, the DOF Group has been awarded contracts in Brazil worth USD 250 million.

Mons S. Aase, CEO in DOF Group said, "I am very pleased over being awarded this long-term contract with Petrobras. The award further strengthens DOF's position in the IMR market in Brazil. DOF Subsea is dedicated to deliver efficient services without compromise to safety."

Libra Consortium is led by Petrobras - with a 40% interest - in partnership with Shell Brasil (20%) ; Total (20%), CNODC (10%) and CNOOC Limited (10%). The Consortium also has the participation of the state-owned company Pré-Sal Petróleo SA (PPSA) as manager of the Production Sharing Agreement.

Reach Subsea ASA ("Reach") has been awarded a contract for use of the Olympic Challenger in a project in the Gulf of Mexico. The contract, which does not include ROVs, is set to commence in November with a firm period lasting through 1Q2021 and with options to extend towards the summer of 2021. With this contract, Reach has covered its remaining commitment on the Olympic Challenger.

Jostein Alendal, CEO of Reach Subsea, comments: "We are very pleased with our success in building a sensible schedule for the winter season. Admittedly, the Olympic Challenger contract is merely a question of covering our cost in a tough winter market, but with this we are now setting ourselves up to enter 2021 with a solid financial position. We believe this will be an important enabler for our ability to realise some of the interesting opportunities we are pursuing for the future."

GC Rieber Shipping ASA is pleased to announce a new short-term contract for walk -to-work vessel Polar Queen for a Tier 1 client in Europe for work in an offshore wind park. Polar Queen will commence the new contract in mid-November.

​
Eidesvik Offshore ASA has been awarded a time charter contract with Wintershall Dea Norge AS for the PSV Viking Princess. The contract is scheduled to commence in December 2020. The firm contract period is 12 months plus options for extensions.

Jan Fredrik Meling, CEO & President, commented: "We are very pleased that our clients share our dedication to environmental friendly shipping

Eidesvik Offshore ASA ("Eidesvik") has secured a contract with DEME Offshore NL BV ("DEME") for a fixed period of 84 days for the offshore construction vessel Viking Neptun, with options for extensions. Commencement of the contract is scheduled to primo November 2020.

Jan Fredrik Meling, CEO & President, commented: "We are very pleased to see that Viking Neptun continues to be attractive in the offshore wind industry and we are looking forward to demonstrating our capabilities to DEME, which is a new
client for Eidesvik."
You must log in or register to reply here.
Share:
Facebook Twitter Reddit Pinterest Tumblr WhatsApp Email Share Link
Top