New ships will feature the company's exclusive "green cruising" design as part of the first generation of cruise ships to be powered at sea by Liquefied Natural Gas, the world's cleanest burning fossil fuel

Carnival Corporation said two of the new LNG-powered ships are designated for the world's most popular cruise brand, Carnival Cruise Line, and will be built by Meyer Turku at its shipyard in Turku, Finland, with delivery dates expected in 2020 and 2022. The new ship for P&O Cruises UK will be built by Meyer Werft at its shipyard in Papenburg, Germany, with an expected delivery date in 2020. In conjunction with the order, the delivery dates for the new builds for Germany-based AIDA Cruises and Italy-based Costa Cruises for 2020 will shift to 2021 to allow the company to more effectively allocate measured capacity growth across its 10 global cruise brands in more markets throughout the world.

In total, the company now has agreements in place to build seven LNG-powered cruise ships across four of its 10 global cruise brands in coming years. As previously announced, the first of these ships is expected to be in service for AIDA Cruises and Costa Cruises in 2019.

Based on Carnival Corporation's next-generation "green cruising" ship design, these new vessels will be part of the first generation of cruise ships to be fully powered by LNG, which is an industry first and an environmental breakthrough that will produce the most efficient ships in the company's history. Pioneering a new era in the use of alternative fuels that reduce air emissions, these new ships will use LNG to generate 100 percent of the ship's power both in port and on the open sea – an innovation that will significantly reduce exhaust emissions to help protect the environment and support the company's aggressive sustainability goals.

"We are proud to be at the forefront of introducing LNG-powered ships to the cruise industry, working with our partners to achieve shipbuilding breakthroughs like this that will help us produce the most efficient and sustainable ships we have ever built," said Arnold Donald, CEO of Carnival Corporation & plc. "This is also an important step in our fleet enhancement plan that enables us to execute on our long-term strategy of measured capacity growth over time, while delivering innovative new ships that further elevate our already great guest experience. Every time we launch a new ship, we have a new opportunity to create excitement and show consumers why cruising is a great vacation at an exceptional value, especially for those who typically consider land-based vacations."

As part of its fleet enhancement plan, Carnival Corporation has already taken delivery of three new ships in 2016 for its AIDA Cruises, Carnival Cruise Line and Holland America Line brands, and plans to launch the all-new Seabourn Encore in December 2016. Including Seabourn Encore and the three new ships announced today for Carnival Cruise Line and P&O Cruises UK, Carnival Corporation has a total of 18 new ships scheduled to be delivered between 2016 and 2022.

Bernard Meyer, managing partner of Meyer Werft, with roots dating back to its founding in Germany in 1795, said: "We are excited to welcome P&O Cruises back to Meyer Werft in Germany and Carnival Cruise Line back to Meyer Turku in Finland. These new ships will be built in our most modern and environmentally friendly facilities, and we are very proud to design, build and deliver these ships that provide breakthroughs in innovation and for the environment."

Name to be announced on Thursday May 24 at 4pm

Josh Weinstein said: “This is the first time in 20 years that P&O Cruises has had a ship built by Meyer Werft and I’d like to thank everyone who has worked so hard to get us to the first stage in the life of this ground-breaking vessel. Meyer Werft has an enviable track record of producing genuinely innovative ships which also deliver tremendous levels of operational efficiency and we look forward to continuing our successful partnership over the next couple of years to this ship’s completion in 2020 and beyond.”

Paul Ludlow added: “This is a very exciting and momentous day. Our new ship will be the largest ship ever operated by the brand and the largest ever to be dedicated exclusively to the UK cruise industry. It will also be the first ship in our market to be powered by LNG, the most environmentally-friendly power source yet for large-scale cruise ships. With UK passengers numbers set to top two million for the first time this year, we are confident in cruising’s future and believe that there will be an exceptionally positive UK response to this ship and the innovations it will bring. We also expect this ship to persuade many UK consumers to take that all important first cruise.”

P&O Cruises will announce the name of the new ship on Thursday May 24 at 4pm on the company's Facebook page. This highly anticipated announcement comes as a result of a competition that P&O Cruises ran last year when it invited members of the public to suggest a suitable name for the ship. Over 30,000 submissions were received with a panel of experts making the final decision.

The video of the steel cutting ceremony can be seen here http://www.pocruises.com/new-ship

P&O Cruises today revealed Iona will be the name of its LNG-powered 5,200-passenger newbuild.

The ship will debut in Southampton in spring 2020, making it the biggest vessel to sail out of the UK at 183,900 tons.

The name came from a contest as P&O asked its guests and fans to submit names, receiving over 30,000 entries.

"We can trace our history and roots back to Scotland," said Paul Ludlow, senior vice president.

"We couldn't think of a more fitting name for our new ship than after an island that is one of the UK's most beautiful places: Iona."

The name combines the company's historic links with Scotland with the celebration of "our island nation’s connection to the sea."
Ludlow called the name selection process challenging

"The ship is the next stage of the future of P&O Cruises," he added.

Carnival Cruise Line reaffirmed its place as the leader of innovation in the U.S. cruise industry today as the first steel was cut for the line’s newest class of ship and the new livery was revealed for the 180,000-ton XL vessel that will be the first-ever ship operating in North America to use liquefied natural gas (LNG).

At the ceremony, the company also revealed a dramatic new red, white and blue hull design that celebrates its legacy as America’s Cruise Line and pays homage to maritime tradition. Developed by New York-based Bluarch Architecture, the design builds upon the company’s iconic color scheme that has made Carnival one of the most recognizable brands in travel and is highlighted by a stately navy blue hull inspired by officers’ uniforms along with vibrant red and white accents running the entire length of the 1,130-foot-long ship.

“This new ship promises to be truly special, from its groundbreaking technology and one-of-a-kind features to its distinctive livery and hull design that is both timeless and forward-thinking while paying tribute to our nearly 50-year history of making wonderful vacation memories for our guests,” said Christine Duffy, president of Carnival Cruise Line.

Following the steel-cutting ceremony, construction began on the 5,200-plus lower berth ship which will offer a variety of never-before-seen innovations and will be the first North American-based cruise ship to be powered by LNG, part of Carnival Corporation’s “green cruising” design platform.
“The start of construction of this amazing ship is a historic day for our company as we are laying the foundation for an unparalleled seagoing vacation experience that will be like no other and take our cruise offerings to the next level,” Duffy said.

“We are extremely pleased to work together with Carnival on this large and highly innovative ship. With the first steel cutting, our efforts in designing the hull, features and interior of the ship start to take shape. We are also very proud to build the first-ever LNG powered cruise ship for North American market, making this state-of-the-art green technology a reality,” commented Jan Meyer, CEO of Meyer Turku.

As previously announced, the as-yet-unnamed ship will operate from Port Canaveral, Fla., beginning in 2020. The ship’s name is scheduled to be revealed in early December. Details on the ship’s inaugural season are planned to be announced in January, with information on the vessel’s vast array of exciting culinary, beverage and entertainment options to be revealed later in 2019.

Papenburg, 29 May, 2019 - The keel laying ceremony of the new cruise ship for the British P&O Cruises with vessel number S. 710 has been yet another milestone at the MEYER WERFT in Papenburg. It marked the official start for assembling the hull of the new luxury liner for the United Kingdom. The ship will be handed over to the customer in spring 2020.

The traditional keel laying coins were placed by Paul Ludlow (President P&O Cruises) together with Stephan Schmees (Executive Board Member Project Management) MEYER WERFT und Jürgen Storz (Project Leader MEYER WERFT). Block 1B measures 21.5 m in length, 19.4 m in width and 9.8 m in height. It weighs 461 tons and is part of the future fore ship of the new cruise liner.

With its rating of more than 180,000 GRT, the IONA will be the new flagship of the P&O Cruises fleet. It’s one of the first ever cruise ships to be powered 100% by LNG, making it particularly environmentally friendly.

Bad that they are speaking of GRT in an official shipyard press release. GRT has been out of use for decades. It is GT now which is a different measurement unit. 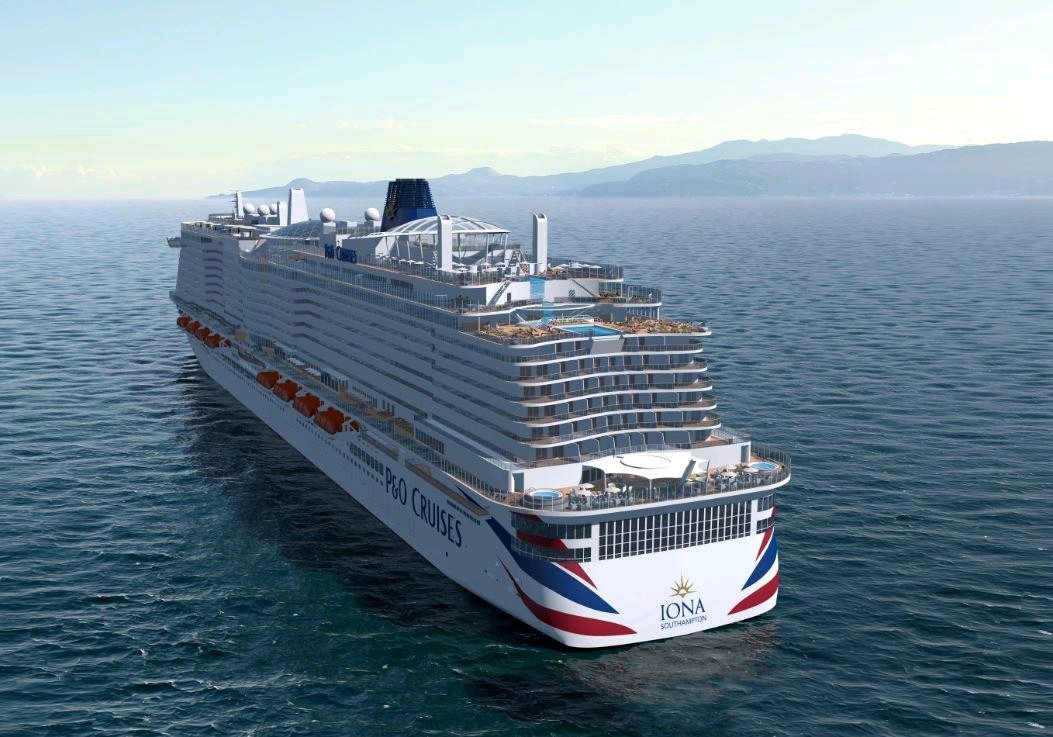 I think you mean Meyer Werft as the source for the illustration ;-) . Still pretty cool, I think this will turn out to be the nicest looking version of the new Carnival platform. 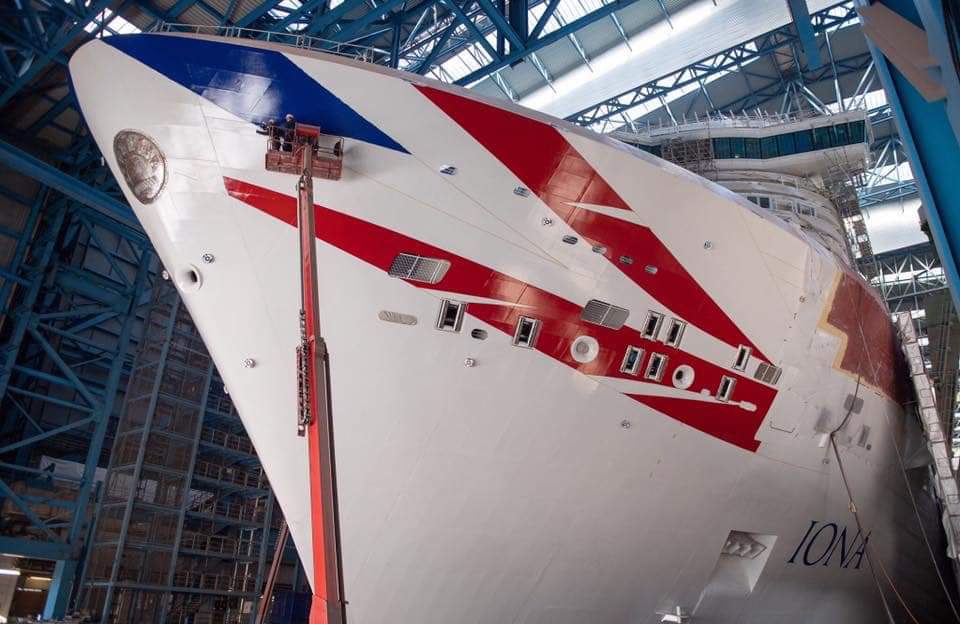 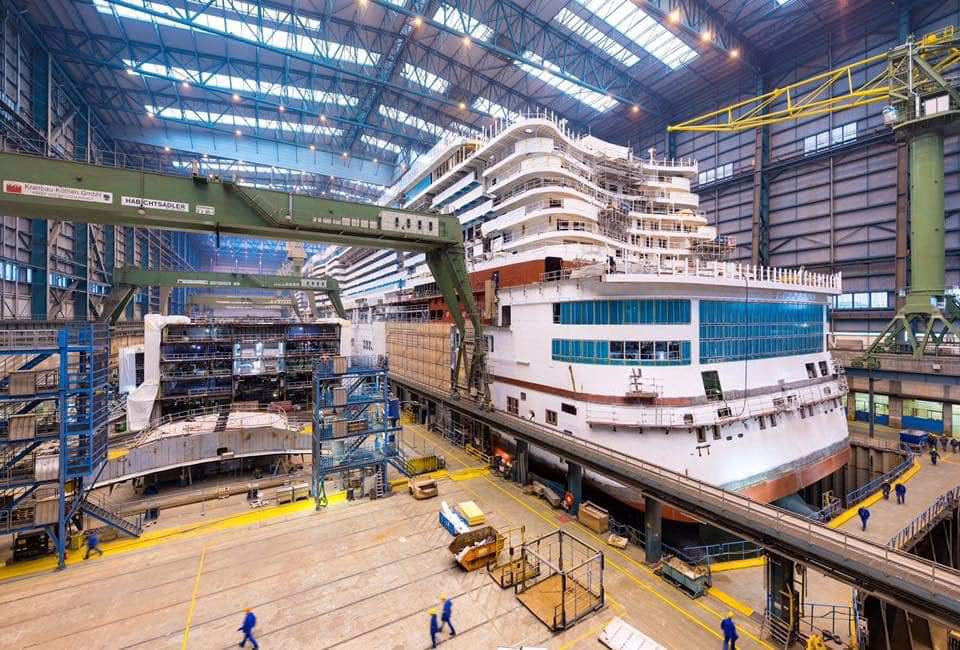 Her er skipet som alene sørger for at Bergen setter ny cruiserekord i 2020.

Meyer Turku is adjusting its production schedule and will consequently move the delivery of Carnival Mardi Gras from August 2020 to October 2020.

Carnival Cruise Line has been informed by officials at the Meyer Turku shipyard that delivery of Mardi Gras will be delayed and is advising booked guests and travel advisors that the first revenue sailing of the ship will be Nov. 14, 2020.

With this new schedule, Carnival will now take delivery of the ship in late October and its first revenue sailing will depart from Port Canaveral on Nov. 14, 2020. Consequently, the first eight sailings that were scheduled starting Aug. 31 have been cancelled, including European, transatlantic and New York-based itineraries and four Port Canaveral itineraries.

Carnival said that the guest notification process began promptly after the notice by Meyer Turku so that impacted guests could begin to make alternative vacation plans. As a gesture of goodwill, Carnival is offering these guests a 25 percent future cruise credit (FCC), in addition to the full refund of their cruise fare (and applicable fees and taxes and other pre-purchased cruise components), as well as assistance with non-refundable airline and hotel reservations already booked. In addition, if guests rebook their cruise vacation using their 25 percent FCC by Feb. 18, 2020, they will be credited with an additional $100 per person onboard credit for that cruise. Carnival has also communicated guidelines to travel advisors regarding commission protection.

“We have been working closely with Meyer Turku executives to keep the Mardi Gras delivery on schedule, and while we deeply regret disappointing our guests, this change in the delivery date is required to make sure all of the ship’s systems, features and technology will be fully operational, so that we can give our guests the vacation they expect. Our commitment is to deliver a great and innovative ship, and Mardi Gras will definitely be that when it arrives in North America,” said Ben Clement, Carnival Cruise Line’s senior vice president of newbuild.