...og for salg via byggeverfta:

Another batch of former Toisaowned vessels have been sold at bankruptcy auctions in recent weeks. With regards to PSVs and AHTS vessels, the earlier sales of the Toisa Conqueror, Coral and Intrepid have been followed by the sales of: the Toisa Invincible (VS 483 PSV) to DP Acquisitions Inc for USD 500,000; the Toisa Crest (AP 416 ROV/PSV) to Maritech International Ltd for USD 750,000; and the Toisa Elan, Toisa Envoy and ToisaExplorer (VS 4616 AHTS vessels) to Eastern Navigation Ltd for USD 5 million, USD 6 million and USD 6 million respectively.

Following on from the sale of the three former Toisa subsea vessels that were reported in October’s Seabreeze, we have seen further sales of the former Toisa subsea fleet recently. Subsea 7 has acquired the dive support vessel Toisa Pegasus for USD 34.3 million, while Administradores Navieros Del Golfo SA de CV (ANG) purchased the DSV Toisa Paladin for USD 18.5m. ANG previously bought the Toisa Perseus. Finally, Eastern Navigation paid USD 6 million for the
Toisa Wave. The 2009-built Toisa Pegasus (which is equipped with a twin bell 18-man saturation dive system, a 400t crane and accommodation for 199 persons) and the MT6016L Toisa Paladin (which is equipped with an 18-man dive system, a 140t crane and accommodation for 100 persons) have been laid up since 2017. It is expected that Subsea 7 will utilise the Toisa Pegasus in Southeast Asia, but no firmdetails have been confirmed. Five offers were received for the Pegasus but Subsea 7’s offer was USD 1.7 million higher than the next best offer for the vessel. The VS483 MkIII-designed Toisa Wave has been laid up since 2015 and will be mobilised from the North Sea to Singapore.

Meanwhile, Qingdao Wuchuan Heavy Industry shipyard in China has received bids for the two Salt 305-designed newbuild IMR support vessels that had originally been ordered by Toisa in 2015. The DP2 Toisa Reveille and Toisa Resolute vessels will have 150-tonne cranes, a deck area of 1,100m², enclosed ROV hangars for two large work class ROVs, and accommodation for up to 100 persons. Both vessels are understood to be close to completion. The ZMPC yard is also marketing the SAW2049-designed Toisa Pelagic DSV for sale or bareboat charter. The Drass twin-bell SAT system has yet to be installed on the DSV and delivery is not expected until around mid-2019.
J

Subsea 7 has finalised the acquisition of Toisa Pegasus, a multi-purpose offshore construction and dive support vessel. The 2009-built vessel is to be renamed Seven Pegasus and will primarily support Subsea 7’s operations in the North Sea and Asia Pacific.

The versatile vessel can perform both heavy and light construction work scopes. Designed and built by IHC, this highly capable DP3 vessel features a twin-bell 18-person saturation diving system and benefits from a 400T crane enabling it to support a range of construction projects. Additionally, its large and flexible 1,200m2 back deck provides further scope for a variety of applications.

The vessel will undergo a docking and crew familiarisation programme before commencing operations in quarter two 2019. 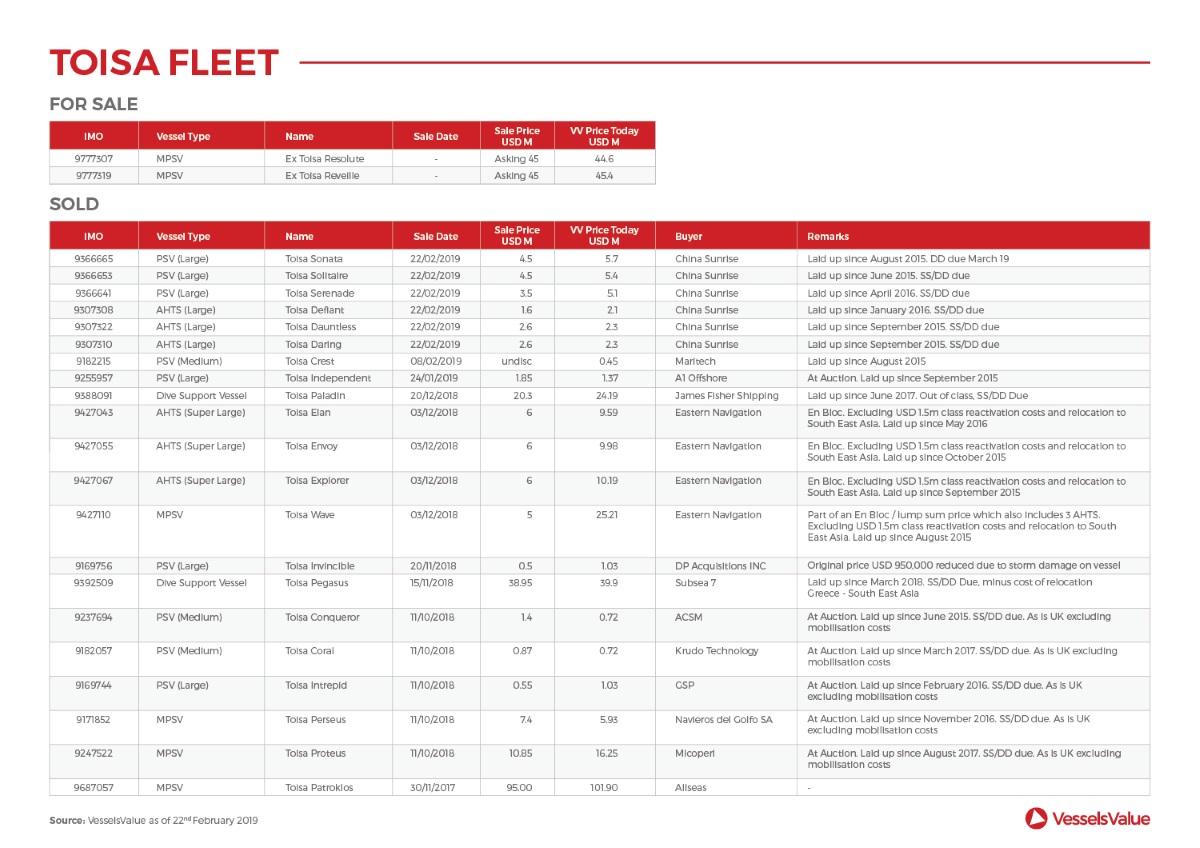