Singapore, 4 April 2018 – Vard Holdings Limited (“VARD” or the “Company”), one of the major global designers and shipbuilders of specialized vessels, is pleased to announce that it has signed a Letter of Intent (“LOI”) for the design and construction of two cruise vessels for Viking (“Viking”).

The potential contract value for two vessels is expected to be approximately NOK 4.5 billion and the LOI also includes an option for two more vessels. The parties have a common intention to enter into final contract by mid-2018.

Delivery of the vessels are scheduled from VARD in Norway, in 2Q 2021 and 2Q 2022 respectively. The hulls will be built by VARD in Romania.

Mr. Roy Reite, CEO and Executive Director of VARD, commented “It is our pleasure to work with Viking to develop a new series of cruise vessels. The company is well known for its expansion in River Cruises and Ocean Cruises, and they are now looking to Norway for the design and construction of its new cruise fleet. We are honoured to be chosen as their partner in this exciting project, and look forward to continuing the excellent cooperation with the Viking team.”

Viking was founded in Switzerland in 1997; Norwegian Torstein Hagen is Chairman. With operational headquarters in Basel, Viking provides destination-focused itineraries designed for experienced travelers whom have an interest in geography, culture and history. The company currently operates a fleet of more than 60 vessels. Through rapid expansion, the company has grown to be the world’s leading river cruise line, and with the launch of its new ocean fleet, the company has also become a leader in small ship ocean cruising. www.vikingcruises.com

VARD: LETTER OF INTENT FOR 2 SPECIAL CRUISE SHIPS FOR VIKING

Trieste, April 4, 2018 – Vard Holdings Limited (“VARD”) - a subsidiary of Fincantieri - has signed a Letter of Intent for the design and construction of two special cruise vessels for Viking, with an option for two more vessels. The ships, with deliveries scheduled in Norway in 2Q 2021 and 2Q 2022 respectively, will be the first that Vard will build for this ship owner.

The potential contract value for two vessels is expected to be approximately Norwegian Krone 4.5 billion, equal to more than euro 460 million. The parties have a common intention to enter into final contract by mid-2018.

The project, totally innovative, will be developed by Vard Design in close cooperation with the customer, according to the highest safety and reduction of the environmental impact standards, drivers which have increasingly greater weight also in the cruise sector.

Starting from 2012, Fincantieri has received from the same company orders for 10 units, 4 of which already delivered, with the remaining ships to be delivered by 2023. More recently, last March, Fincantieri and Viking have reached an agreement for further 6 ships, which expand the horizon of the partnership until 2027.

Singapore, 24 July 2018 – Vard Holdings Limited (“VARD” or the “Company”), one of the major global designers and shipbuilders of specialized vessels, is pleased to announce that the contracts for the design and construction of two cruise vessels for Viking have been confirmed. The total contract value is approximately NOK 5 billion.

A Letter of Intent (“LOI”) had been announced on 4 April 2018, with parties common intention to enter into final contract by mid-2018. The contracts for two vessels have now become effective.

The contract has been entered into in the ordinary course of business of the Company. It is not expected to have any material impact on the earnings per share or the net tangible assets per share of the Company for the current financial year. None of the Directors or the controlling shareholders of the Company have any interest, direct or indirect, in the above contract.

Viking Cruises will launch its expedition program in 2021 as the first of two newbuilds will join the company’s fleet.

The new vessel series will fall under the name Polaris class, Cruise Industry News can reveal.

The ships will feature a number of standard expedition amenities, including zodiacs, but will also have submarines aboard and carry a 20-person expedition team, which is slightly larger than the expedition staffs on other cruise vessels.

A vessel size has yet to be revealed, but steel cutting is expected to take place later this year for the first ship, which will be built by VARD.

In previous announcements the new expedition ships have been described as “special,” and are believed to be dual-fuel, capable of running on LNG.

Viking will base its expedition operation out of an Oslo office.

With over 50 percent of the European river market, Torstein Hagen’s Viking Cruises has impressively grown from a single ocean ship in 2015 to a fleet of six today with the Viking Jupiter having been delivered earlier this month from Fincantieri.

Another 10 930-guest ships are set to follow through 2027, in addition to the expedition program, and an expected entry into the Mississippi River market. 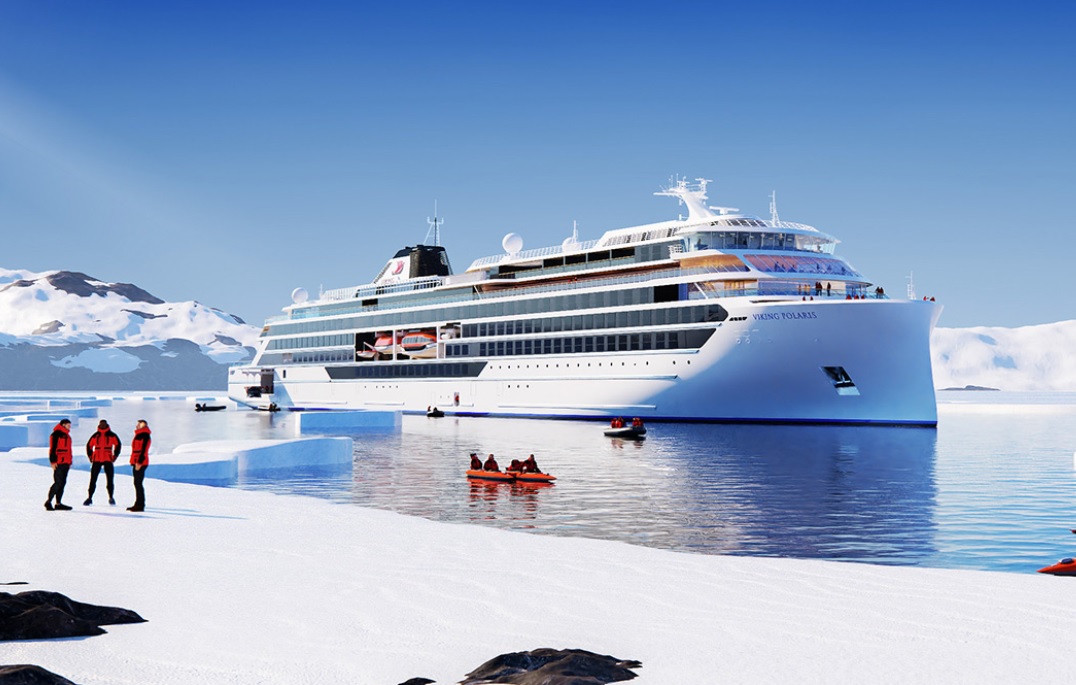 Viking, the world’s largest river cruise line, made modern river cruising into what it is today.

Four years ago, Viking reinvented ocean cruising with the launch of ocean cruises and their first cruise ship, Viking Star.

In a little over two years from now, Viking will begin to offer expedition cruises.

These 379 passenger ships will be rated as Polar Class 6, allowing Viking to operate during summer & autumn in medium first-year ice.

Viking Expeditions will start off by offering two different itineraries, one to Antarctica and one to the Arctic.

The cruises to Antarctica will be 13 day roundtrip voyages from Buenos Aires, Argentina.

In addition to spending an entire week on the last continent that is teeming with penguins, seals, whales, and other wildlife, the cruise will include scenic cruising days in the Drake Passage and around the legendary Cape Horn.

Viking Expeditions lists the following description for the voyages to Antarctica:

“This ultimate adventure takes you to the Antarctic peninsula, where you will witness towering glaciers, snow-covered landscapes, massive icebergs and once-in-a-lifetime wildlife encounters.

In the footsteps of explorers such as Amundsen, Shackleton and Scott, you will be one of the few to discover the world’s last truly wild frontier.

Each day brings new surprises and the opportunity to change plans to maximize wildlife sightings and adapt to ever-changing weather.”

The voyages to the Arctic will also be 13 days in length beginning and ending in Tromsø, Norway.

You will sail from Tromsø to the western coast of Svalbard and experience the stark beauty of the Arctic, where polar bears reign and blue ice floats serenely on the horizon.

Here it is silent and still one moment, a cacophony of migrating birds, barking seals and calving glaciers the next.

From this northern archipelago of frozen tundra, dramatic fjords and remote human settlements, you will witness this world awakening from winter slumber to a land of midnight sun.

Loyal past Viking guests can begin to reserve one of the Viking Expeditions now. If you reserve by December 31, 2019, you will receive free gratuities and the Silver Spirits Beverage Package.

Viking confirmed to Cruise Fever that a formal announcement of Viking Expedition cruises will be made on January 15, 2020 and more details will be announced at that time. Here is what we know so far.

The expedition ships will be 30,000 gross tons in size and carry 378 passengers.

The ships will have many of the features that are found on Viking’s ocean ships including Manfredi’s, a spa with hydrotherapy pool, Mamsen’s, Explorer’s Lounge, Aquavit Terrace, the Living Room, The World Cafe, and the Restaurant.

There will also be one pool in the aft section of the ship by Aquavit Terrace. Decks 3 and 4 will have a Laundry room.

All staterooms will have an outside balcony and will be the most spacious and elegant of any expedition ship afloat. The cabins will start off at 218 sq. ft. including the private veranda.

So when will the first ship be delivered? 2021? Not a bad looking design by the way. Would have been even better with a "normal" bow, but I guess the vertical bow makes more sense in ice-packed regions.