“This is a very exciting day for Virgin and travelers around the globe”, said Sir Richard Branson, founder of the Virgin Group. “We now have the right partners in place to build a world-class cruise line that will redefine the cruising experience for good. The Virgin Cruises approach will appeal to cruisers and non-cruisers alike, and we look forward to being in Miami and delivering an experience for people who want a new way to cruise”.

Tom McAlpin, President and CEO of Virgin Cruises added: “Virgin is a customer built brand that listens carefully to what customers want, sharing their ideas on what the new cruise line can do to deliver an incredible experience at sea. We are committed to making waves in the cruise industry, and partnering with Fincantieri sets Virgin Cruises up to do just that. Today’s announcement and Fincantieri’s expertise in prototyping, their creativity and understanding of our vision bring together important ingredients in our future success”.

Giuseppe Bono, CEO of Fincantieri, stated: “I am honoured that our company is the selected partner for Virgin Cruises for such an important programme, which states the entry of a prestigious brand in the cruise industry. I am convinced that this choice will contribute to expand the audience of cruise passengers, considering that the market segment still has wide growth margins. I am sure that both our teams together will create a cutting edge project, in order to set up a memorable guest experience. This agreement increases the number of our partners and strengthens our world leadership. The backlog which we can count on allows us to give an important contribution to the economic growth our country and, thanks to it, our workers and suppliers can rely and trust on continuous employment for a long period”.

Trieste, December 20, 2016 – Ship construction contracts valued at approximately 2 billion euros between Fincantieri and Virgin Voyages (part of Virgin Group of companies) for three new cruise ships have been finalized and are now effective. The three units will be built at the shipyard in Sestri Ponente (Genoa) with delivery scheduled for 2020, 2021 and 2022 respectively.

Each ship will weigh about 110,000 gross tons, be 278 meters long and 38 wide. The ships will feature over 1,400 guest cabins that can host more than 2,800 passengers, accompanied by 1,100 crew members on board to deliver the famed Virgin service.

These ships will stand out for original design and craftsmanship. They will include some highly innovative ideas and design solutions, notably for energy recovery, reducing the overall environmental impact. For example, they will be equipped with an energy production system of approximately 1 MW, which uses the diesel engine’s waste heat. The result is, therefore, a project which distinguishes Virgin Voyages in the worldwide cruise scenery.

Trieste, 22 March 2017 – The steel cutting ceremony of the first of three new cruise ships that Fincantieri is building for Virgin Voyages (part of Virgin Group of companies) was held today in Sestri Ponente (Genoa).
The ceremony was attended, among others, by Tom McAlpin, President and CEO of Virgin Voyages, and for Fincantieri by Luigi Matarazzo, Senior Vice President New Building Merchant Ships, and Paolo Capobianco, Director of the Sestri shipyard.

Each ship will weigh about 110,000 gross tons, be 278 meters long and 38 wide, with delivery scheduled for 2020, 2021 and 2022 respectively. The ships will feature over 1,400 guest cabins that can host more than 2,700 passengers, accompanied by 1,150 crew members on board to deliver the famed Virgin service.
These ships will stand out for original design and craftsmanship. They will include some highly innovative ideas and design solutions, notably for energy recovery, reducing the overall environmental impact. For example, they will be equipped with an energy production system of approximately 1 MW, which uses the diesel engine’s waste heat. The result is, therefore, a project which distinguishes Virgin Voyages in the worldwide cruise scenery.

A first look at Virgin Voyage's external design shows off a futuristic looking prototype ship. Under construction in Italy, Fincantieri will deliver the first of three ships to the new brand in 2020.

The cruise experience will be for guests aged 18 and over, with no children allowed.

"Adorned at the hull you’ll find our beautiful, mermaid guide. Inspired by the traditional bows from ships of yore, she is our ship’s muse. The soul of the voyage. Our elegant leader. The feminine spirit of the ship," said Virgin, in a statement.

"Designed with the glitter and glam of a yacht, the ship’s livery stands out on the high seas. She glides with a unique level of sophistication paired with an unapologetic aire of mystery. A design meant to excite and inspire sailors to want to explore every corner."

Virgin is also offering a pre-sale, in which a $500 deposit will guarantee a spot on the list for a cabin in 2020.

The start-up brand is referring to passengers as "sailors."

"From dining and entertainment to wellness and rejuvenation, nearly every single element of the Virgin Voyages journey will bring a unique Virgin Style to the high seas – and not just for our 2,800 Sailors, but also for the 1,150 crew members who will reside there and make amazing happen," the company added.

Virgin Voyages is promising to reinvent the cruise experience, and one of the most traditional parts of a cruise ship – the funnel – will be rethought and redesigned for the company’s upcoming trio of Lady-class ships.

The design firm has been tapped by Virgin to redevelop the cruise ship funnel.

“This big cruise ship needed elements to be more of a super yacht than a cruise ship,” continued Arens.

“What Virgin Voyages really wanted to do was to create something very different. They wanted the funnel to be a funnel, but not a funnel.”

Added Adrian Chisnell, project manager: “It was actually known as the non funnel … traditionally (the funnel) has been a bit of an afterthought. It has been put on top of the boat.

“This is the first time we know the funnel is not being used in that way,” he said.

The duo from RWD described their design brief for Virgin as luxurious and iconic, while being different, exciting and new.

“The Virgin Voyages ship will hopefully be one of the most recognizable in the world,” Chisnell said.

Virgin Voyages has revealed further details of its new cruise line and the three new 110,000-ton cruise ships, the first of which is currently under construction by Fincantieri. At a New York City event, Virgin provided a first look into some of the interior designs for the new ship.

Tom McAlpin, President and ceo of Virgin Voyages, stated that they are committed to creating “more than just another cruise line.” While the ship will accommodate more than 2,700 passengers, they are seeking to create “a more personal and intimate experience,” he notes.

McAlpin says they spent a full year on design and another year on engineering. Steel cutting for the first ship began in March 2017, with elements being built at three shipyards, including Romania and Palermo The Fincantieri yard at Sestri Ponente in Genoa started assembly on October 31, 2017.

Using what Virgin is calling a “Creative Collective,” they brought together leading interior design firms, none of whom had any experience of cruise ships to develop the passenger spaces. The idea is to bring a new perspective, as part of Virgin’s mission to redefine what consumers can expect from a holiday at sea.

The team includes Tom Dixon’s Design Research Studio in London, Roman and Williams in New York, Concrete Amsterdam, Softroom in London, and WorkAC in New York and are harmonising their efforts by sharing their designs “in the cloud.”

Dee Cooper, Senior Vice President of Product Design for Virgin Voyages, who is leading the effort, believes that “The Creative Collective challenged Virgin to do more on ship and think more about lifestyles.”

The designs will use some classic nautical elements so that the passengers, whom Virgin calls sailors, “are always conscious that they are at sea.”
Everything is proceeding under the watchful eye of Virgin founder Richard Branson. While he is not involved in the day-to-day of the process, sources familiar with the progress say that Branson is copied in and reviewing at key junctures. The effort is very sensitive to being faithful to the Virgin brand and for example when it comes to the shipboard nightclub, which was inspired by Richard Branson’s history in the music industry. “If Virgin can’t do the best darn night club at sea, nobody can,” they say. Fincantieri and Virgin Voyages celebrated the steel cutting today for the second of three Virgin ships being built at the Sestri Ponente (Genoa) Shipyard.

During the event, Virgin Group Founder Sir Richard Branson and Virgin Voyages President and CEO Tom McAlpin, welcomed by Giampiero Massolo and Giuseppe Bono, Chairman and CEO of Fincantieri, also revealed the name of the first ship currently under construction at the yard: Scarlet Lady, inspired by the name of one of the first aircrafts to fly for the sister company Virgin Atlantic.

According to a prepared Virgin statement: “Scarlet is the embodiment of everything this ship represents, As our figurehead, she takes on a role historically dedicated to goddesses, important women in society, and even mermaid figures.

“Though beautiful and mysterious in vision, she represents a woman of power - the leader not only on our first voyage, but also in our efforts to encourage front-facing female leaders throughout our company with our Virgin Voyages Scarlet Squad Program.”

Fincantieri and Virgin Voyages have signed a contract valued at approximately 700 million euros for the construction of a fourth cruise ship, which will be delivered at the end of 2023.

The new vessel will be a sister ship of the three ships on order with Fincantieri.

Construction is underway at the Sestri Ponente shipyard (Genoa) and the first three ships will enter Virgin Voyage’s fleet respectively in 2020, 2021 and 2022.

The fourth vessel will be approximately 110,000 gross tons, 278 meters long and 38 meters wide. The ship will feature over 1,400 guest cabins designed to host more than 2,770 passengers, accompanied by 1,100 crew members, the company said. 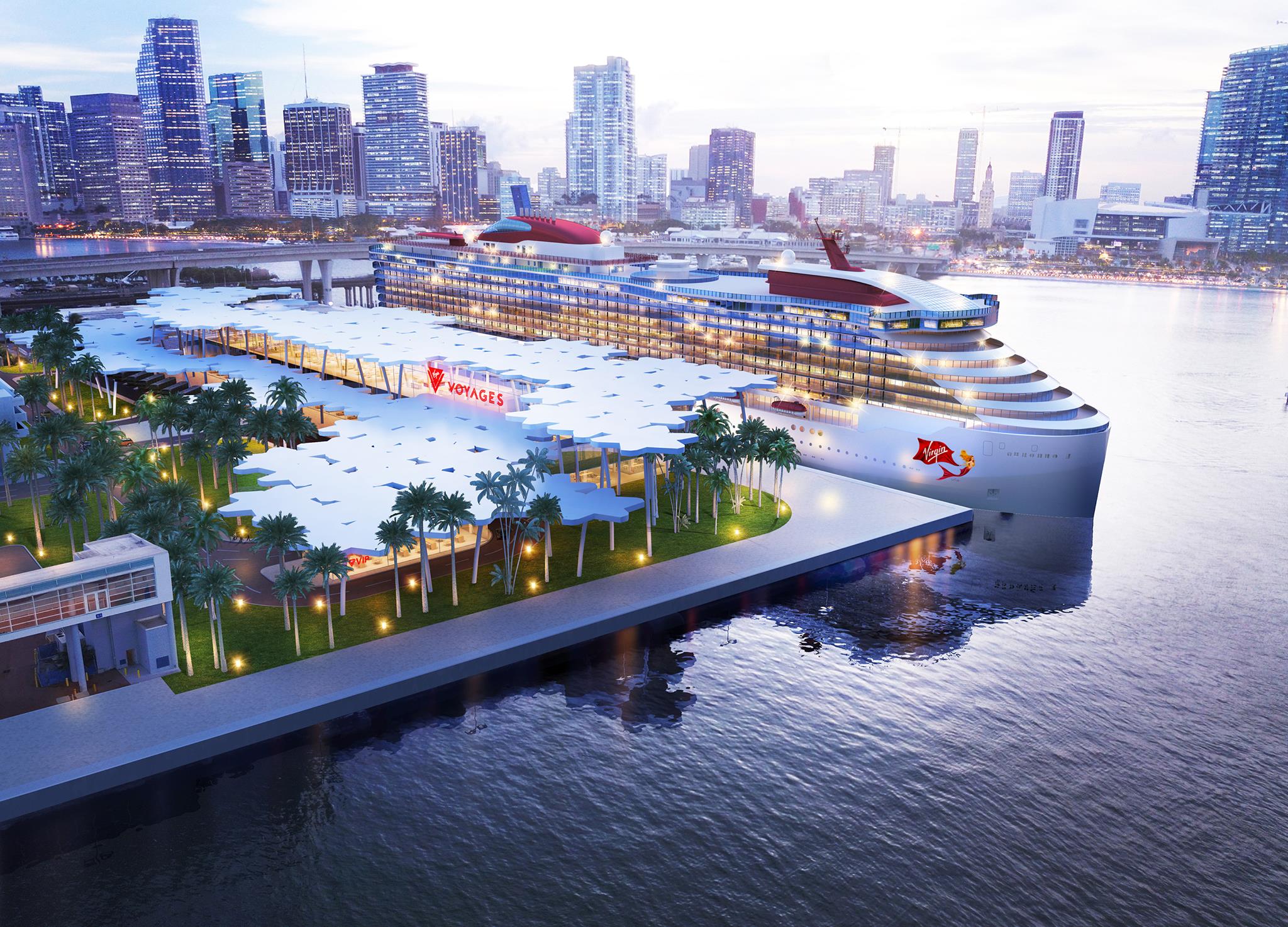 Trieste, February 8, 2019 – “Scarlet Lady”, the first of four ships which Virgin Voyages (a brand part of Virgin Group) ordered to Fincantieri, was floated out today at the shipyard in Genoa Sestri Ponente. Interior fittings will now begin, leading the ship to its delivery, scheduled at the beginning of 2020.

The event was attended, among others, for the ship owner by Tom McAlpin, Virgin Voyages President and CEO, while Fincantieri was represented by Luigi Matarazzo, Senior Executive Vice President Merchant Ships Business Unit and Paolo Capobianco, director of the shipyard. Godmother of the ceremony was Giuliana Rindone, employee of Fincantieri’s shipyard in Sestri Ponente.

“Scarlet Lady” will weigh about 110,000 gross tons, be 278 meters long and 38 wide. Virgin Voyages second ship, currently under construction in the same yard, will be delivered in 2021, while the third and the fourth units will set sail respectively in 2022 and 2023. They will all feature over 1,400 guest cabins designed to host more than 2,770 passengers, accompanied by 1,160 crew members on board to deliver the famed Virgin service.

The development of Virgin Voyages ships will stand out for their design as well as for their particular attention to energy recovery, featuring cutting-edge alternative technologies that reduce the ship’s overall environmental impact. For example, their ships will be equipped with an energy production system of approximately 1 MW, which uses the diesel engine’s waste heat. 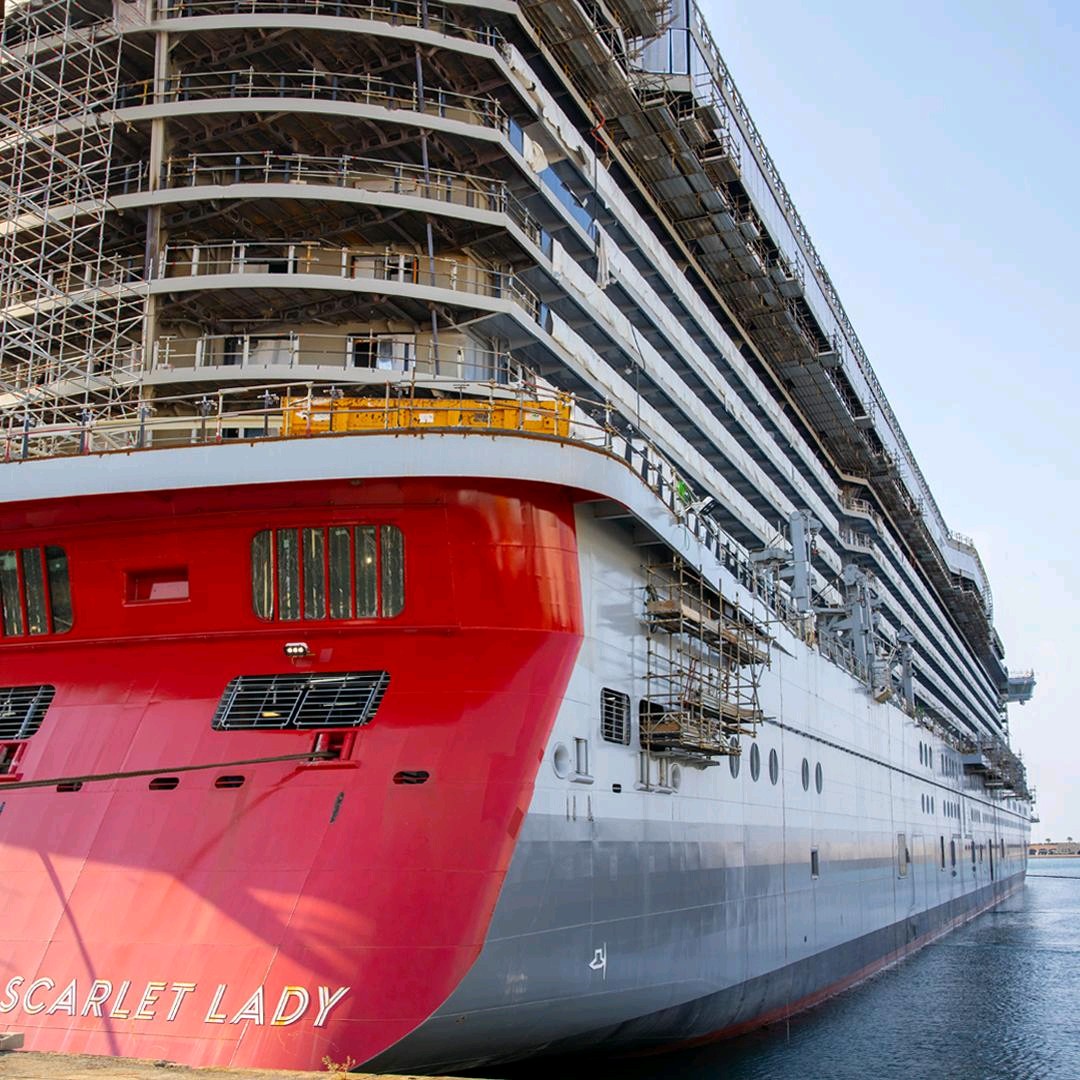 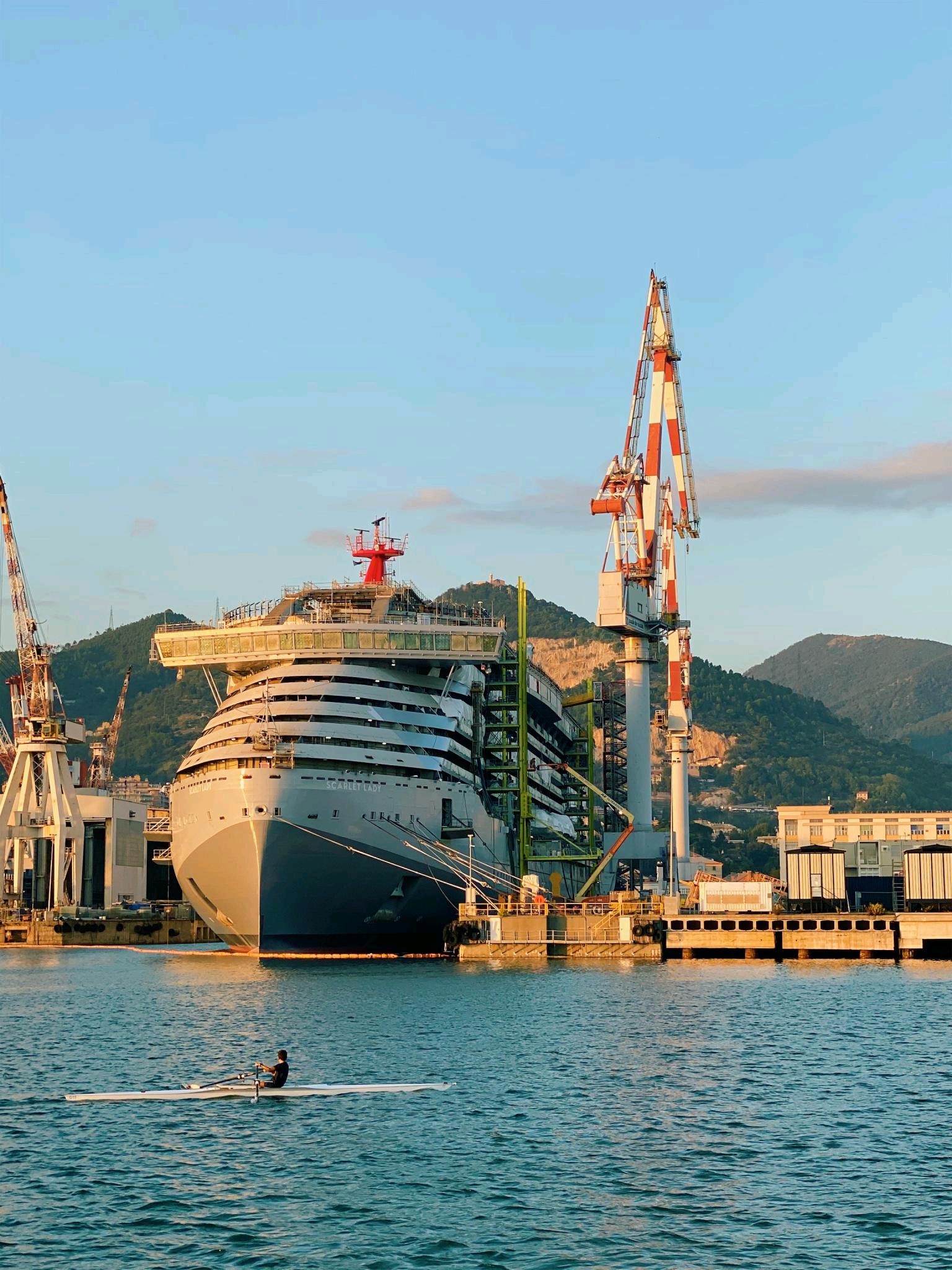 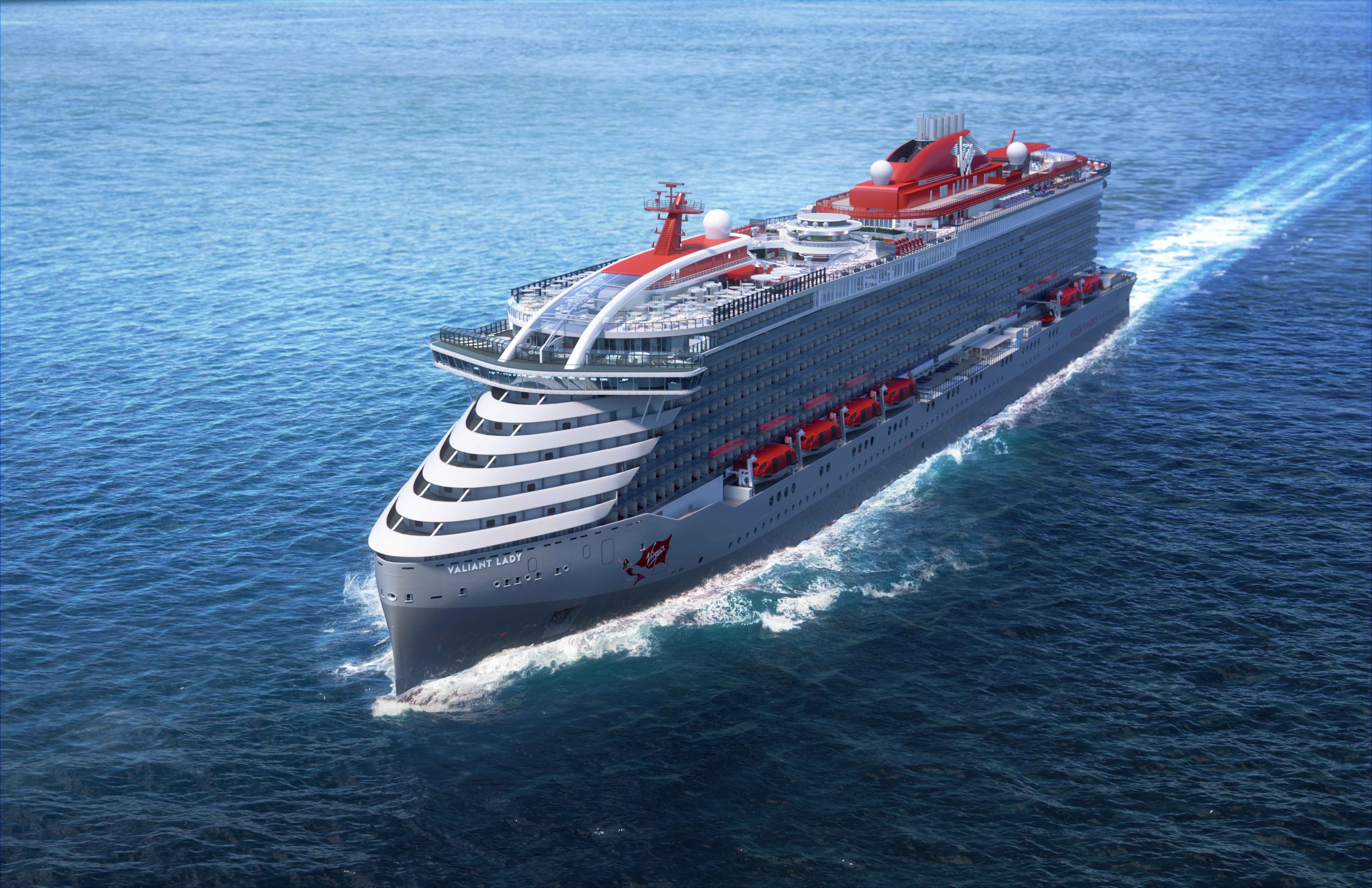 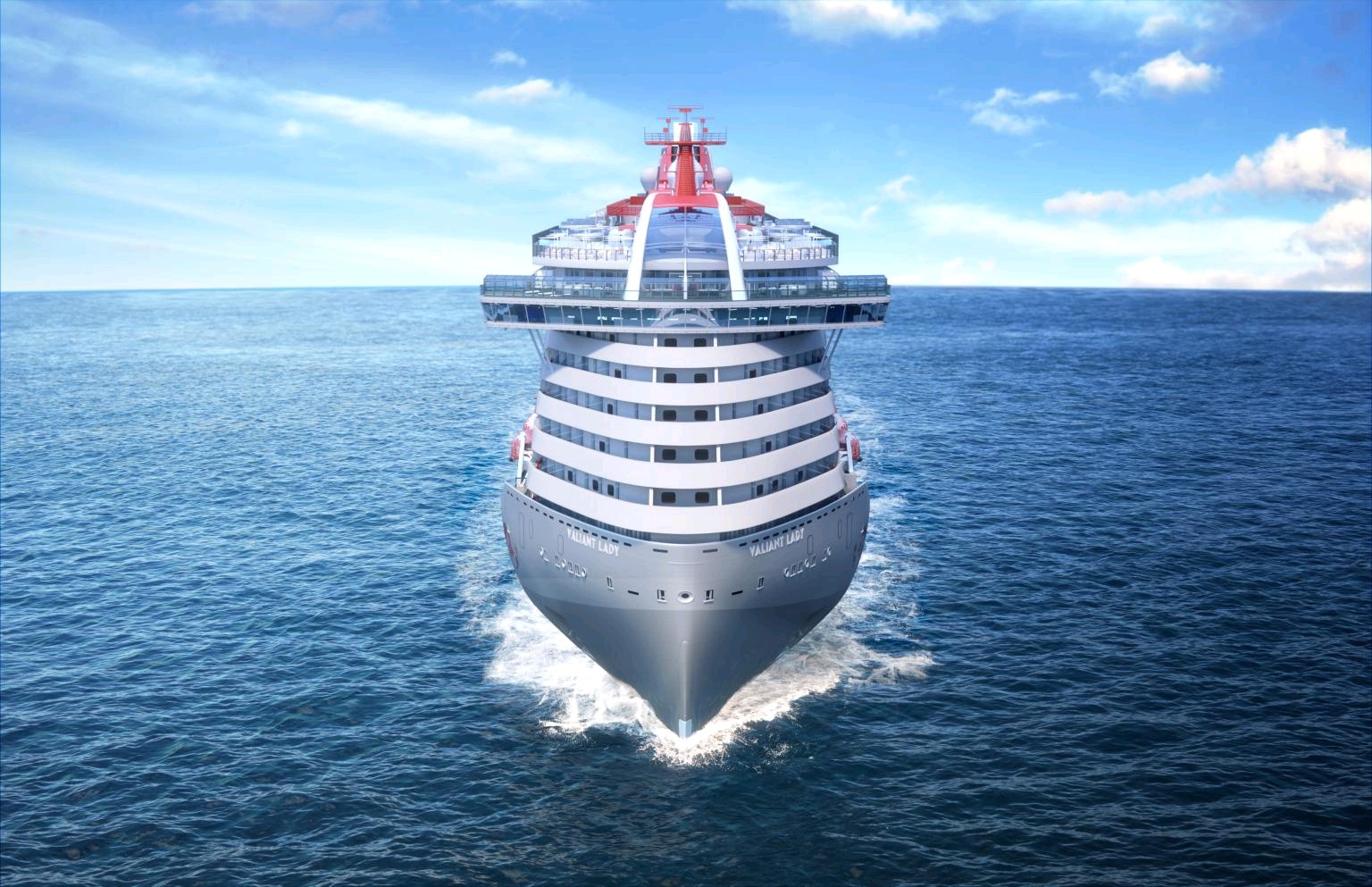 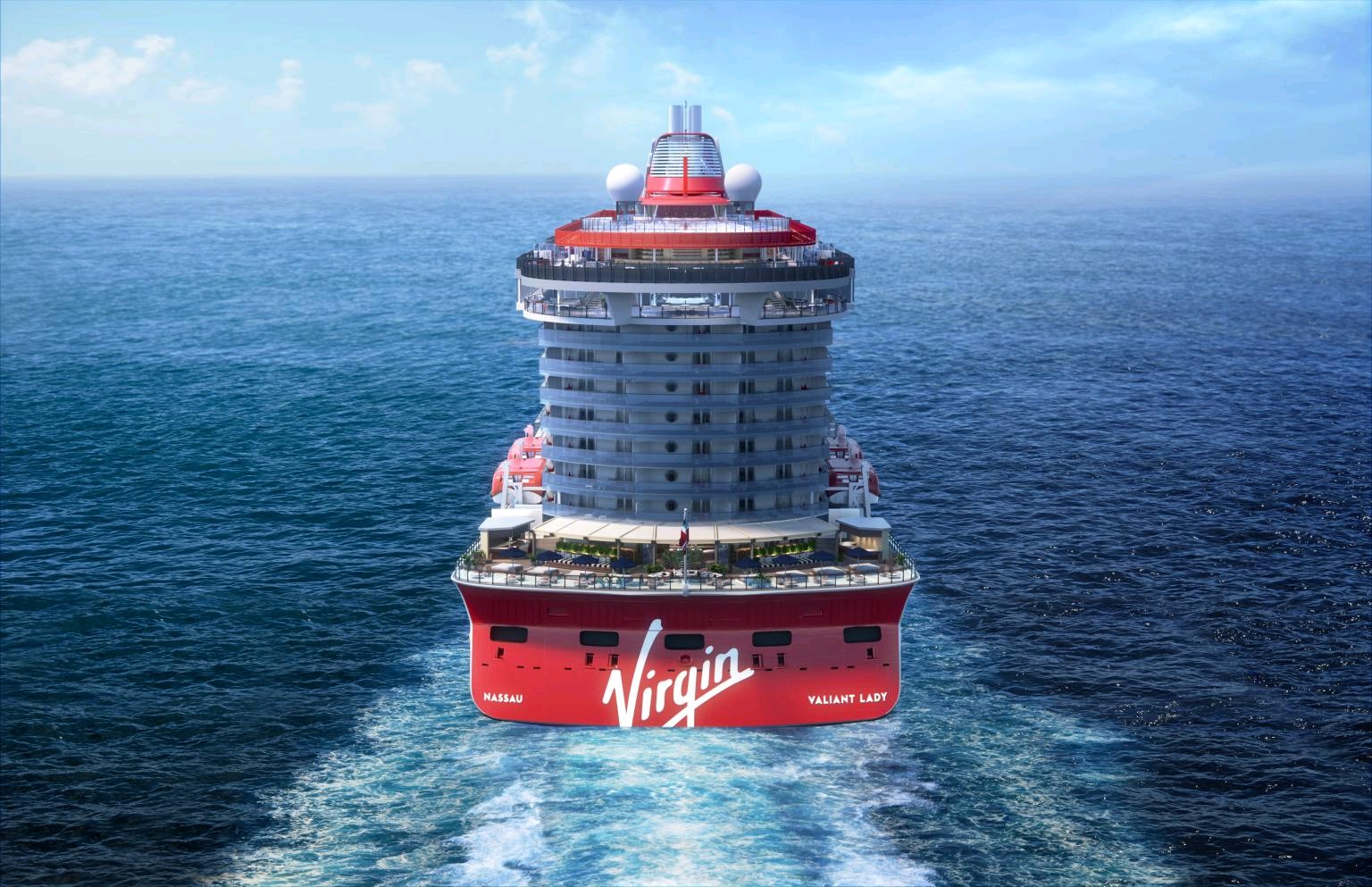 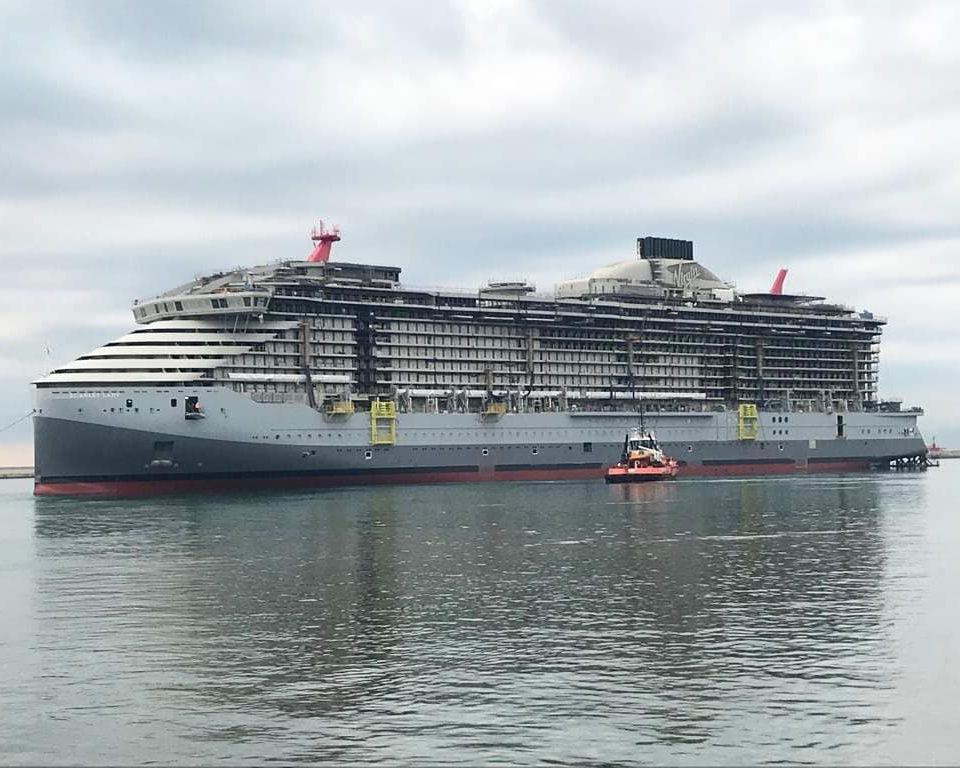 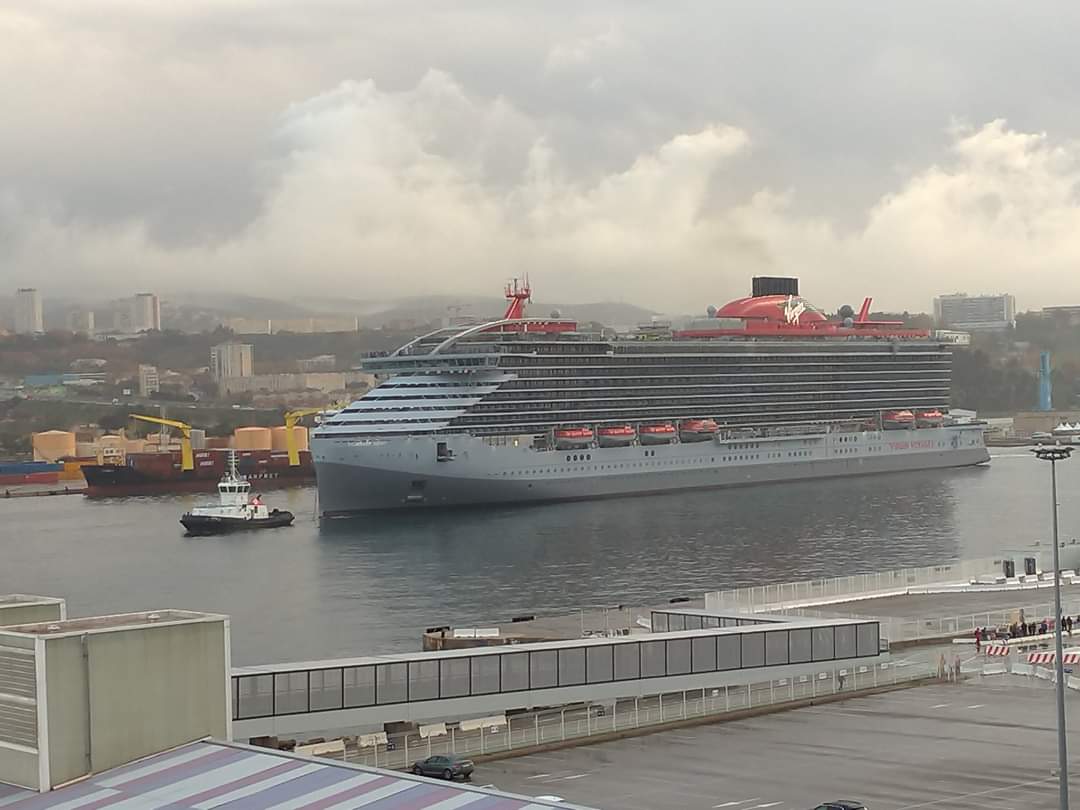 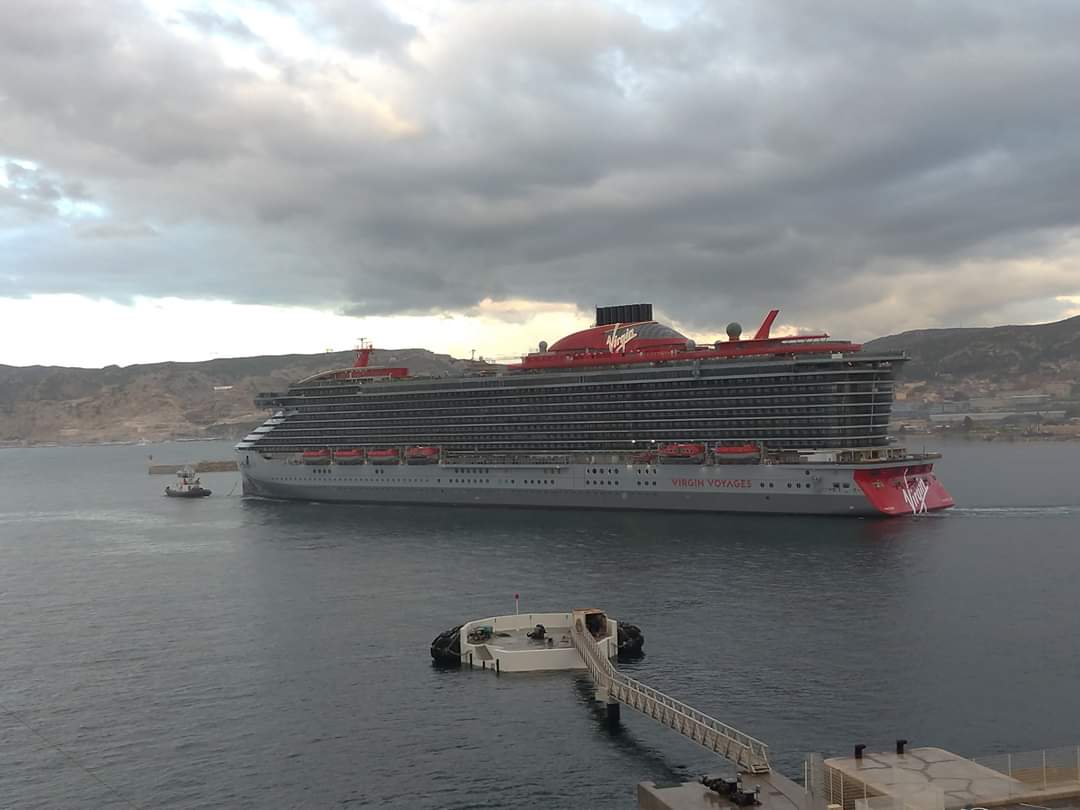