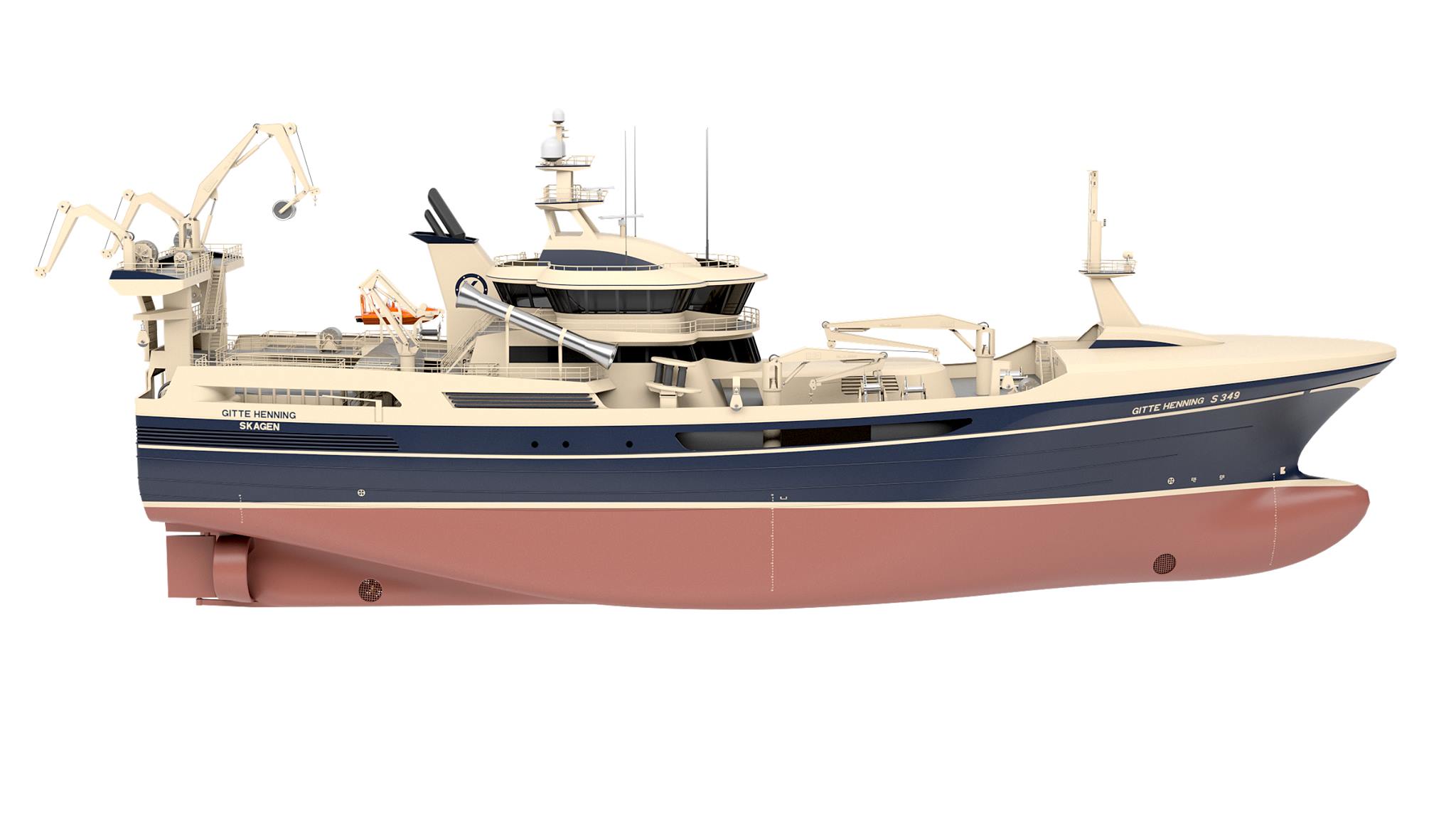 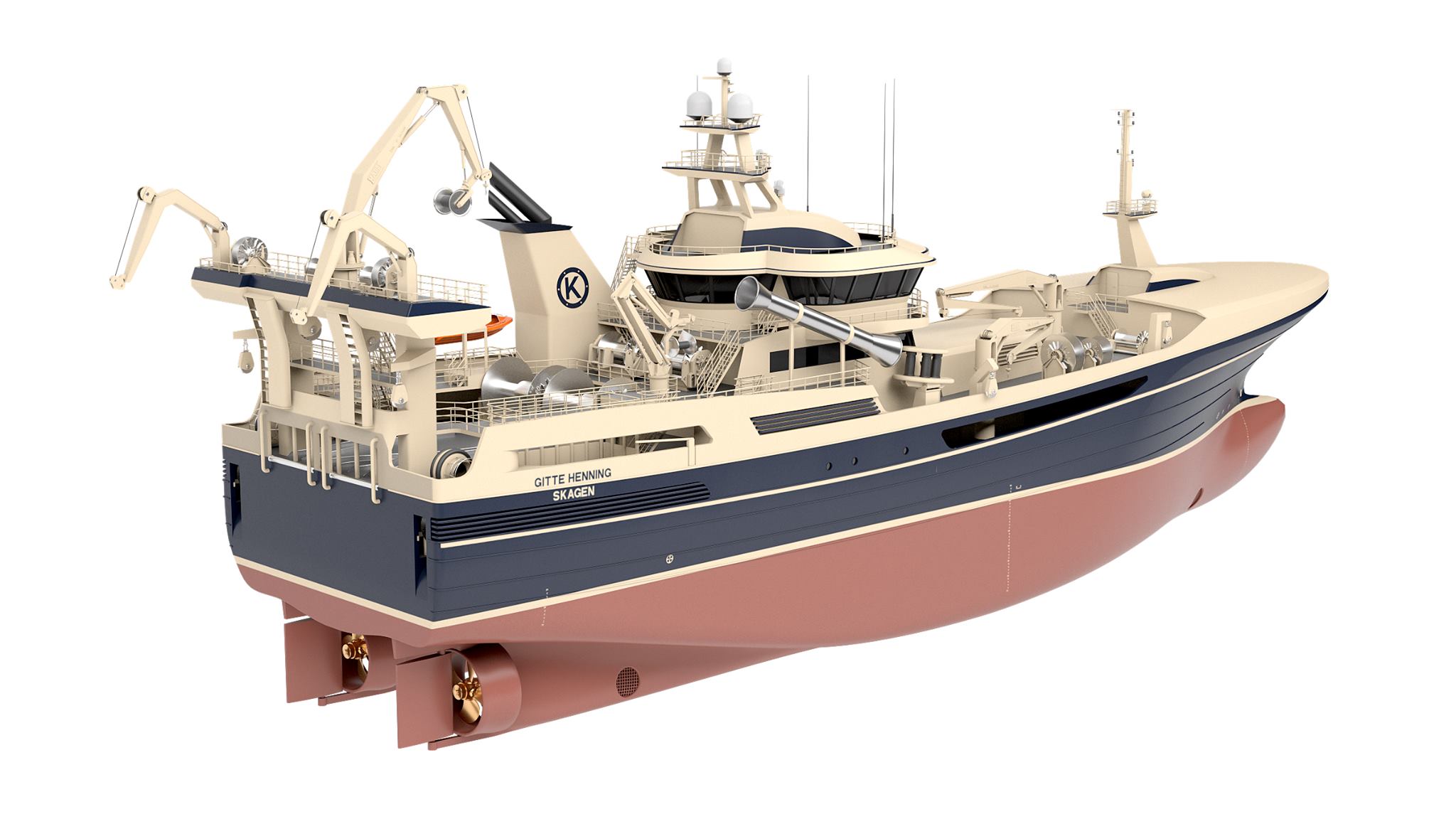 GITTE HENNING fishing company is leading the way by bringing fishing in blue Denmark into a new, green age by contracting a new, environmentally friendly pelagic fishing vessel from the Spanish shipyard Zamakona in Bilbao.

Henning Kjeldsen says he initially intended to withdraw from fishing after the sale of Gitte Henning to the Faroe Islands, as well as receiving offers for all his pelagic fishing rights. After thinking about the future, I got cold feet doing nothing, and contacted Salt Ship Design, says Henning.

Together, Henning and Salt have now designed a new, green Gitte Henning. The new fishing vessel will have a number of environmentally friendly solutions, many of them new in pelagic fishing. Throughout the design process and in the choice of equipment, the focus has been on improving quality of the fish and reducing emissions through reduced energy consumption and efficient power production.

Propulsion and manoeuvring
The one large propeller that is common on pelagic trawlers has been replaced by two propellers and a twin-skeg hull design. Extensive flow analysis and model tests result is a more efficient stern and propeller design, which provides larger trawling pull and less fuel consumption during trawling. Large rudder angles are often needed on conventional fishing vessels to maintain course, even in moderate weather conditions. Two propellers provide the opportunity to steer the ship with minimal rudder impact, which reduces additional energy requirements during sailing and trawling.

Permanent Magnet Motor (PM)
The two propellers are powered by two electric Permanent Magnet (PM) motors. This type of motor has less electrical loss and can operate significantly more efficient than conventional electric motors throughout the power range – particularly at low engine speeds. Low propeller rpm has the following advantages:
Electrical winches
All winches are also powered by PM motors for reduced loss and optimal operation. Electrical winches provide the opportunity to regenerate, the other vice lost, energy when the trawl is set. This energy is available to other consumers and can, for example, be used for propulsion or RSW (refrigerated sea water) cooling. Conventional hydraulic winches and fishing pumps require a system with a significant amount of hydraulic oil. The risk of hydraulic oil spill to sea is eliminated by choosing electric winches.

RSW cooling and fish quality
The RSW area at the new Gitte Henning is arranged in a new way that gives inner surfaces of the RSW tanks a smooth finish with no obstructions or sharp edges. The vessel is equipped with four independent cooling systems, with four RSW tanks per facility. This provides a more efficient cooling process by only cooling parts of the fish tank volume at the time, resulting in an optimal, energy saving cooling system. In addition, the capacity of the vacuum system for unloading has been increased by 40% compared to normal unloading capacity.

Overall, this will provide a more careful handling of the fish that will improve quality.

Electrical operation
All electric motors, from winches to pumps, are frequency controlled. This will provide a more customised power supply and hence reduce the overall energy consumption.

Diesel Electric
Five diesel generators, located in two separate engine rooms for the best possible safety and working environment, supply the propulsion PM motors and all other energy consumers on board. All generators are equipped with catalytic converter (SCR) to reduce emissions and meet new and stricter IMO Tier III requirements.

The energy requirements of a pelagic trawler fluctuate significantly with varying weather, operational conditions, cooling requirements, speed, etc. The number and size of generators are chosen to optimize the power balance based on the vessel specific operational profile and give the diesel engine optimum operating conditions and thus high efficiency.

In this way, the diesel engine will not experience the large load variations which in itself gives a fuel reduction of the range of ~ 10% based on the experience of other diesel electric vessels. So called ‘Peak Shaving’, i.e. the battery is ‘shaving’ the load peaks.

The batteries are located in a separate room, thus providing an additional source of emergency power in addition to the diesel generators in the two engine rooms. In addition, they will significantly reduce noise and emissions in port. 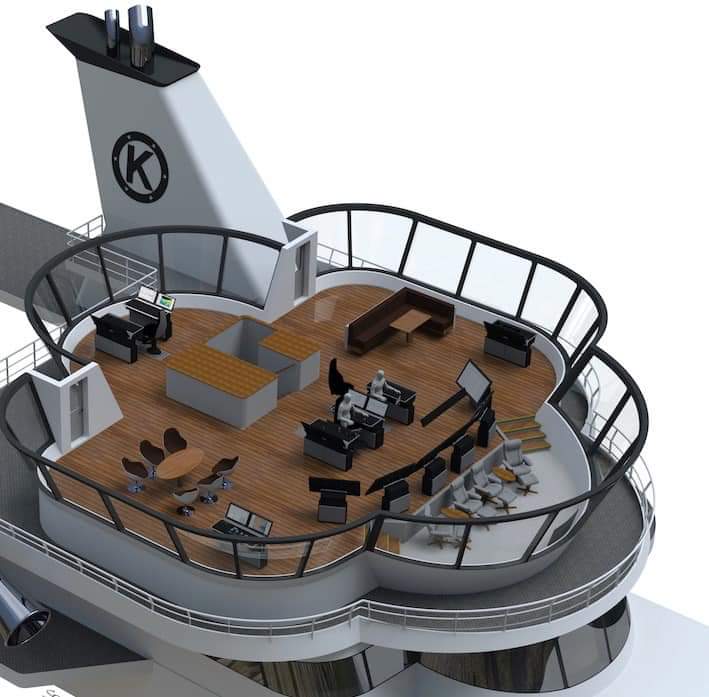 ZAMAKONA YARDS has begun constructing its newbuild for Gitte Henning AS, holding the start of the steel cutting for NB 799 as scheduled on 8th May. NB 799 will have a number of environmentally friendly solutions, many of them new in pelagic fishing (two propellers and a twin-skeg hull design...

ZAMAKONA YARDS keep good progress on the construction of its newbuild for Gitte Henning A/S, holding the start of the steel cutting for NB‐799 on 8th May and keel laying done on 14th July as scheduled. By end of the year, 80% of the steel fabrication will be completed.
www.zamakonayards.com