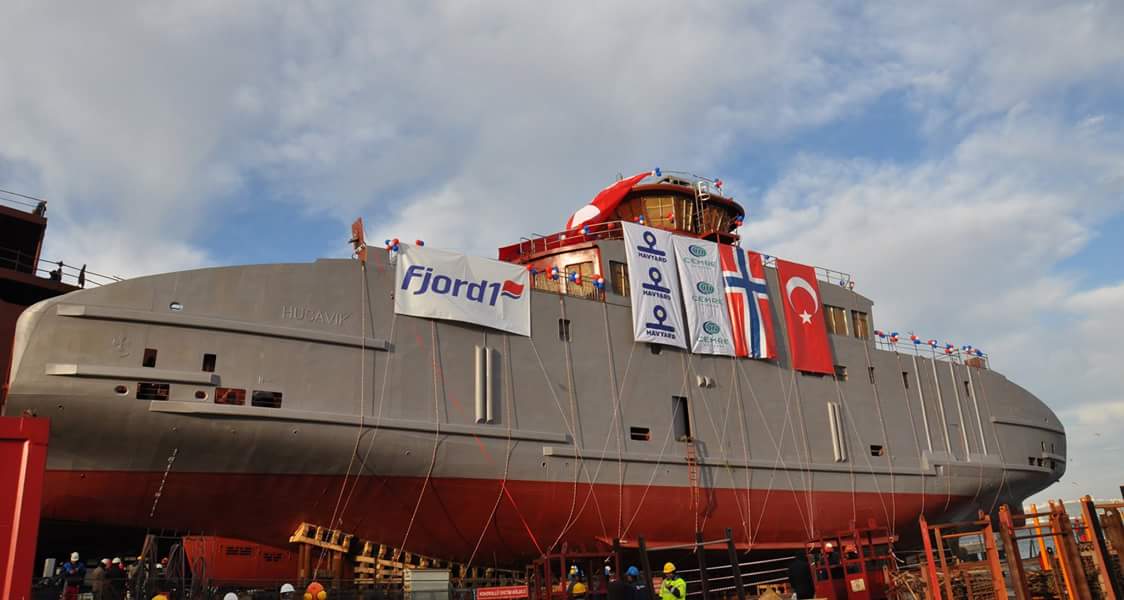 Havyard has met some very stringent environmental requirements and won a total of 13 contracts for the delivery of both equipment for and the building of Fjord 1's battery-powered ferries. The first ferry, Bnr 132 MF Husavik was christened on Monday 14 May in a lovely ceremony at the yard in Leirvik in Sogn.

This is the first of many battery-powered ferries with autocrossing functionality that will be built for Fjord 1 at Havyard Ship Technology in Leirvik. Autocross, a system for automatic fjord crossing, has been delivered and developed by Norwegian Control Systems.

The system calculates the course and speed, as well as acceleration and retardation, that results in the most efficient and economical crossing. Currents, wind and other factors are also taken into consideration.

The autocross system is monitored by the captain, who can take over manual control if necessary.

CHRISTENING
The first of thirteen ferries was christened on Monday 14 May at the yard in Leirvik in Sogn. The County Mayor of Hordaland, Anne Gine Hestetun, is the ferry’s godmother.

Representatives of Fjord1 and yard employees attended the ceremony. After the christening, there was an open ship event for everyone who wanted to take a closer look at the ferry.

‘It's an impressive ferry and we are very happy with the result,’ says Dagfinn Neteland, CEO of Fjord1.

‘It feels good to have started,’ says Lasse Stokkeland, Executive Vice President of Havyard Ship Technology AS. ‘The competition for these assignments was tough, and it's very motivating to witness the christening of our very first battery-powered ferry which is almost ready for delivery.

Now we will maintain full focus on delivering all the other ferries on time and on budget as well, and with the same good quality,’ he says.

The christening concluded with a lunch for all the guests.

POWER
The propulsion system was delivered by Norwegian Electric Systems (NES) and the delivery includes battery systems, generators, DC panels with converters, AC panels, a charging system, transformers and software. This is a robust and safe system that will ensure optimum ferry operations. NES’s technology includes Odin’s Eye®, which was designed to ensure safe and efficient energy transfer between the vessel's two DC systems.

CONTROL
Norwegian Control Systems (NCS) is delivering the integrated alarm system (IAS), the bridge solution Concept Bridge and the Power Management System. The very stringent requirements for environmental reporting of ferry operations have been implemented in the total system, which will also communicate with the onshore charging systems to ensure a safe and efficient charging cycle.

AUTOCROSSING AND AUTONOMOUS VESSELS
The Concept Bridge solution contains a self-developed autocross system. The autocross system will control the speed and power of the vessel’s propeller and set the crossing route, with the defined acceleration and retardation curves that will be the most economical in relation to the estimated time of arrival. The speed is adjusted throughout the crossing to ensure that the energy consumption is as low as possible.

This system is NCS’s first step towards autonomous vessels, an area in which the company is carrying out further research and creating innovative control systems for the future.

We regard this as an autonomous system, since the speed and power during the crossing are controlled by a separate system. The next stage in this development will be autodocking functionality, which will be integrated in these vessels to ensure greater autonomy and predictability in relation to energy consumption.

NES and NCS are investing heavily in innovative solutions for the environmental vessels of the future.