Singapore, 27 September 2015 – Vard Holdings Limited (“VARD”), one of the major global designers and shipbuilders of offshore and specialized vessels, is pleased to announce that it has secured new contracts for the design and construction of two Offshore Subsea Construction Vessels (“OSCV”) for a new customer, Dubai-based Topaz Energy and Marine (“Topaz”).

Specially developed for crane operations and light subsea construction with intervention duties, the vessels will be of VARD 3 08 design, measuring a total length of 98.1 meters with a beam of 20 meters. Designed by Vard Design in Ålesund, Norway, and with hulls to be constructed at Vard Tulcea in Romania, delivery is scheduled from Vard Brattvaag in Norway in 3Q 2017 and 4Q 2017 respectively. The aggregate value of the two contracts exceeds USD 100 million.

The DP2 class vessels will have a 120-ton active heave compensated offshore crane with the capability to reach working depths of 3000 meters. Subsea equipment can be lowered down onto the seabed through a 7.2m x 7.2m moonpool or over the shipside. In addition, both vessels will be prepared for two Remote Operated Vehicles (ROVs), which are deployed via Launch and Recovery Systems (LARS) in the ship’s side. The vessels will be built according to the latest Special Purpose Ship (SPS) regulations, and can accommodate up to 82 persons in high standard cabins.

CEO and Executive Director Roy Reite commented, “We are honored to receive these contracts from our new customer in Dubai, and are pleased to welcome the company into VARD’s client portfolio. We look forward to developing these new vessels closely with the Topaz team." 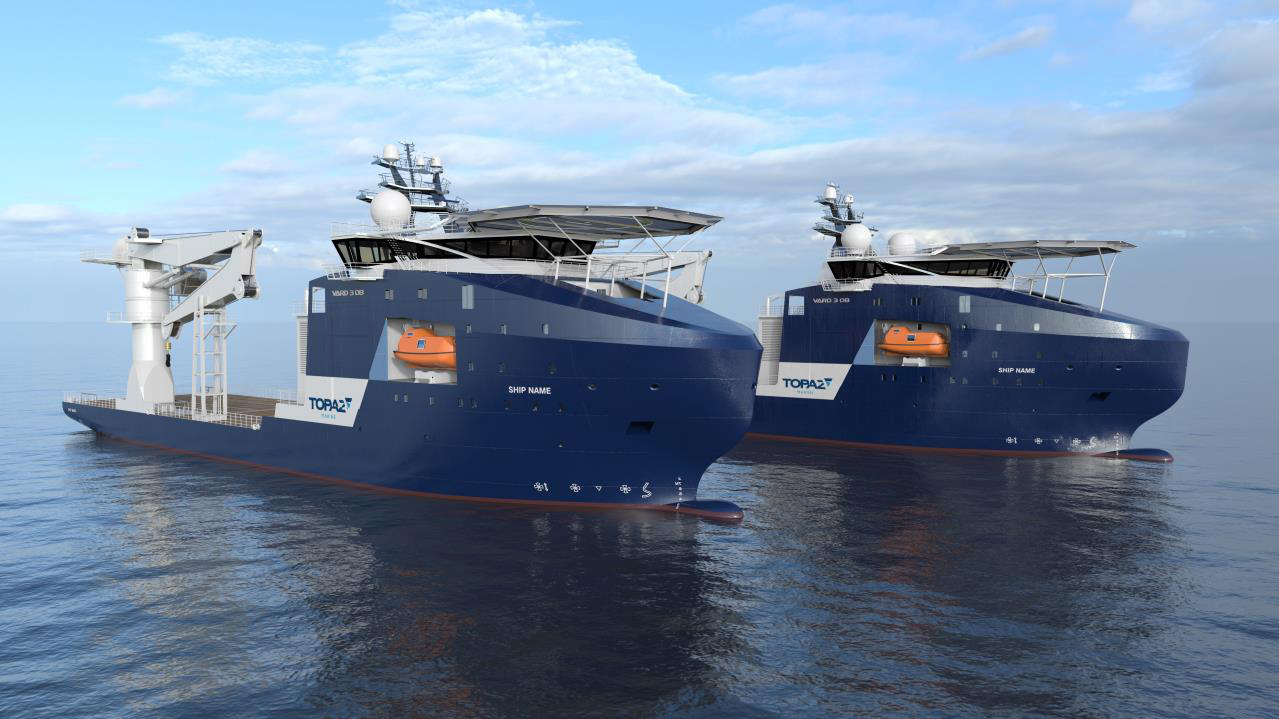 "we have purposefully postponed the launch of our two technically advanced MPSV/ subsea vessels, Topaz Tiamat and Topaz Tangaroa, whilst we finalise details about commercial projects for these vessels" Kilde: Topaz Energy & Marine, Annual Report 2017

Reach Subsea and MMT have over the last year been awarded several important frame agreements for Survey, IMR and light construction within both the oil & gas and renewable sector. With this backdrop of expected increase in activity, Reach Subsea has entered into an agreement with Topaz Energy and Marine (Topaz) for use of the newbuild subsea vessel Topaz Tiamat for 2.5 years, with three yearly options thereafter. Topaz Tiamat will be deployed into the successful co-operation agreement Reach has with MMT. The commercial terms of the charter agreement are confidential between the parties, but are structured in a way that enables Reach and MMT to offer a competitive subsea service to our clients for the next 5.5 year period.

The Topaz Tiamat is a 1,000m², diesel-electric light subsea construction vessel with 82 pax accommodation in comfort class 3, equipped with an AHC 120-tonne subsea construction crane. The vessel is built to the highest North Sea standards, with world-class station keeping and fuel economics. The charter envisages a battery pack upgrade that will even further drive fuel savings and reduce the vessels environmental footprint.

The Topaz Tiamat will be mobilized during Q1 2019 with ROVs from within the current Reach ROV fleet. Thus, investments associated with this expansionary move are limited at the outset.

The vessel is intended used for Reach and MMT own projects within Survey, IMR and light construction within the oil & gas and renewables sectors. This subsea spread is well suited for our core focus markets and has a good fit with the tenders we currently have outstanding.

Jostein Alendal, CEO of Reach says: "We are very pleased to be able to offer a next generation subsea spread to our clients, an energy efficient vessel that fits nicely into our focus markets. The Topaz Tiamat is the first vessel chartered from Topaz, but based on their professionalism and proactive approach, we believe this will be the start of a successful and productive cooperation going forward."

Rene Kofod-Olsen, CEO of Topaz Energy and Marine said: The Tiamat and Tangaroa, designed with, and built by, VARD Norway, set new benchmarks in efficiency, operability and cost-competitiveness. These vessels, along with Topazs agile commercial mindset and reliability as a counterparty, have allowed us to forge a new long-term partnership with a strong subsea partner like Reach Subsea and we look forward to continue finding innovative ways of serving the offshore energy industry together.

The charter contract will take effect from February 2019 for a firm duration of seven months, with options to extend to late 2020. The agreement reflects market terms.

The Topaz Tangaroa, which was ordered in 2015 as part of an ongoing fleet renewal and reinvestment strategy by Topaz, is a 1,000m², diesel-electric light subsea construction vessel with 82 pax accommodation in comfort class 3, equipped with an AHC 120-tonne subsea construction crane. The vessel is built to the highest North Sea standards, with world-class station keeping and fuel economics.The Topaz Tangaroa and its sister vessel, the Topaz Tiamat, were both designed with, and built by, VARD Norway.

The charter adds to Topaz’s industry-leading revenue backlog, which as of 30 September 2018 stood at US$1.4 billion.

Rene Kofod-Olsen, CEO of Topaz Energy and Marine said:
“Having recently signed the Topaz Tangaroa’s sister vessel – the Topaz Tiamat – on a long-term contract to Reach Subsea of Norway, it is particularly rewarding that both vessels are leaving the yard to go straight onto significant contracts with strong counterparties. The contracts reflect the trends we are seeing with both general subsea operators and offshore wind project owners becoming increasingly selective and demanding innovative, safer and more efficient vessels.

“This significant contract is a testament to Topaz’s strategic, counter cyclical investment into a growing subsea segment and our ability to deliver the prerequisite technology and safety capabilities our clients increasingly require. This approach has enabled us to forge new long-term partnerships with two new partners, and to strengthen our position in serving clients in both the oil & gas and renewable energy sectors.” 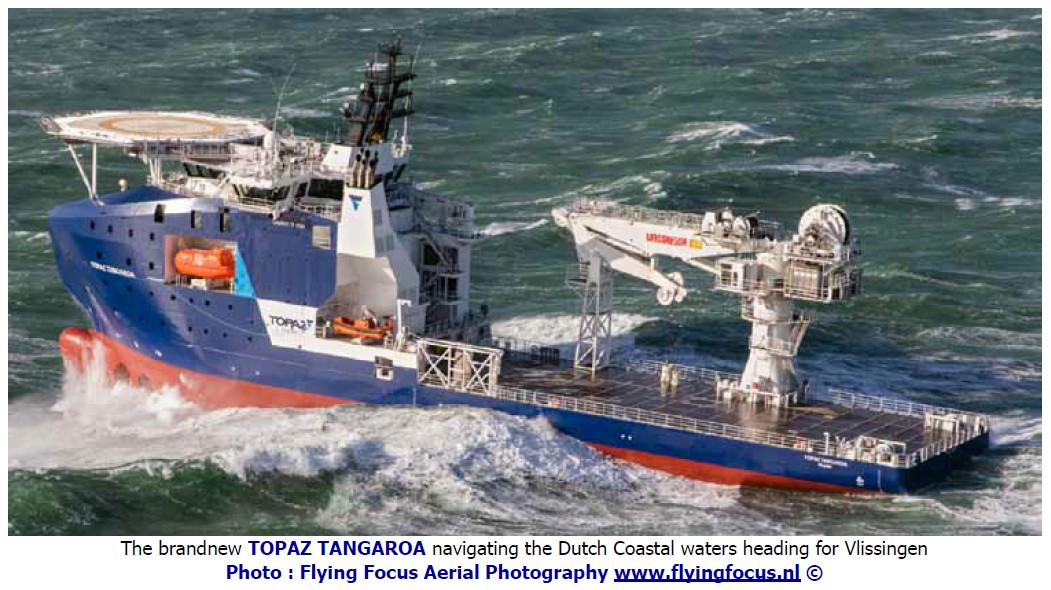 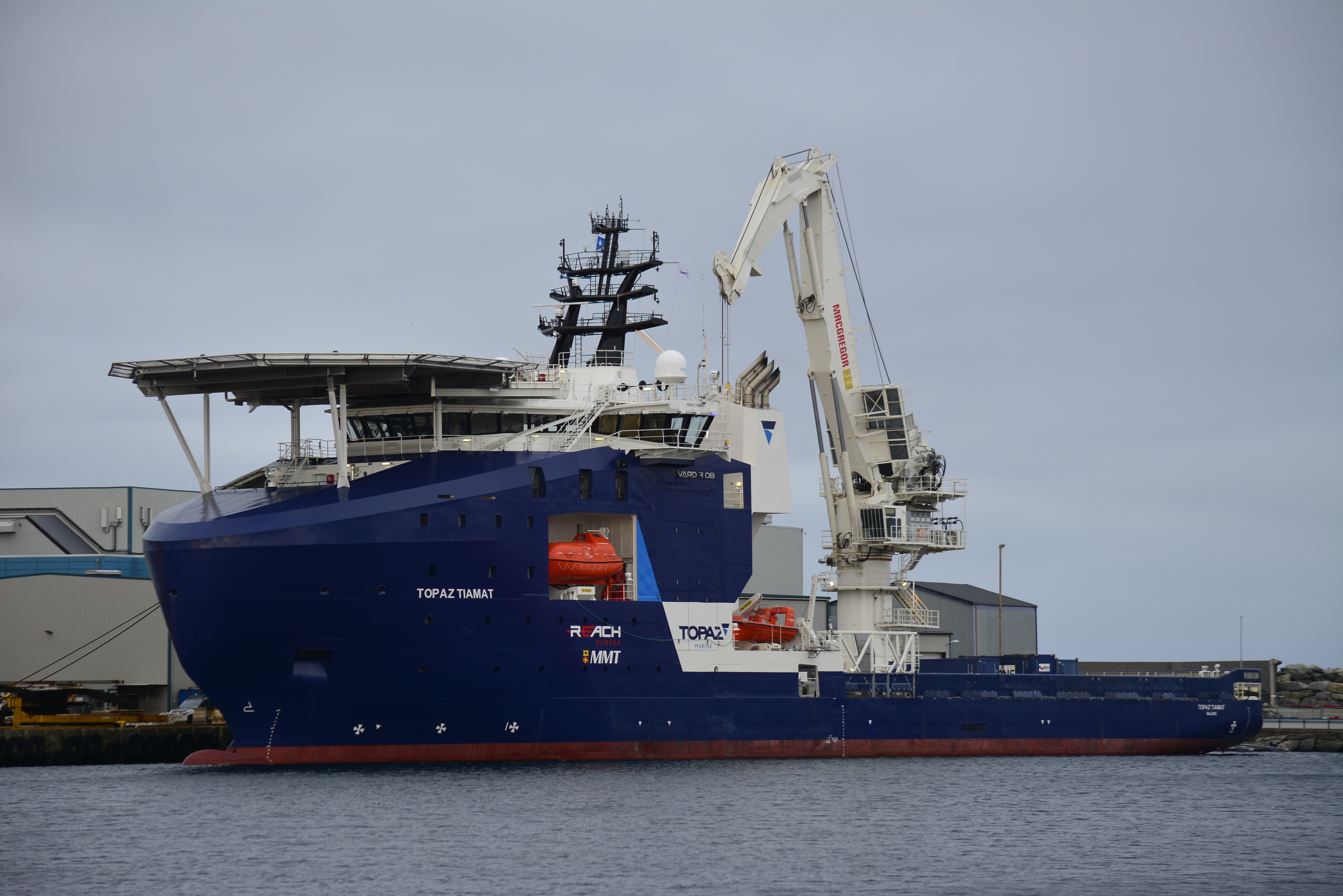 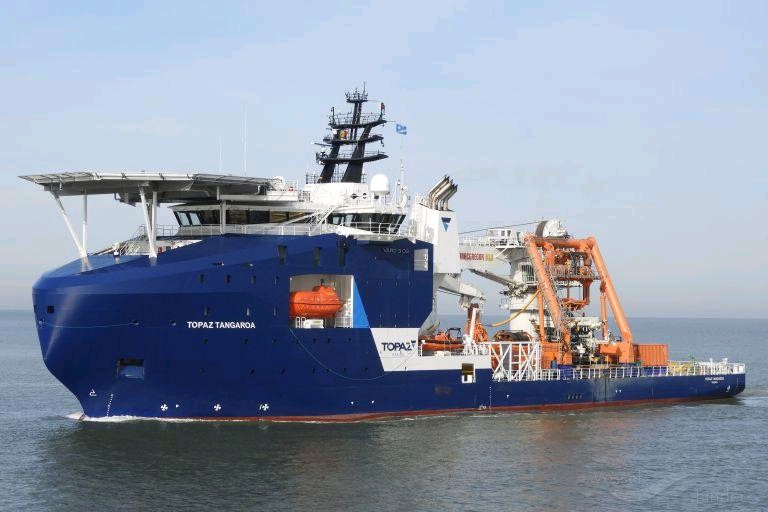 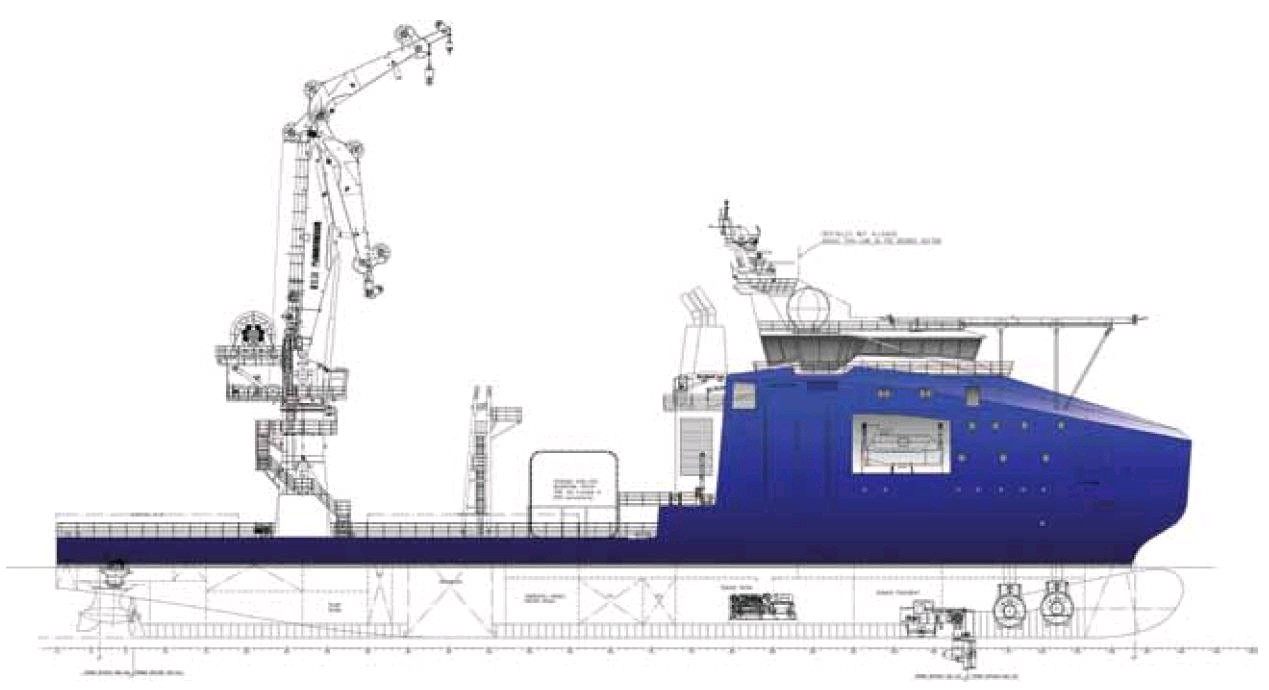 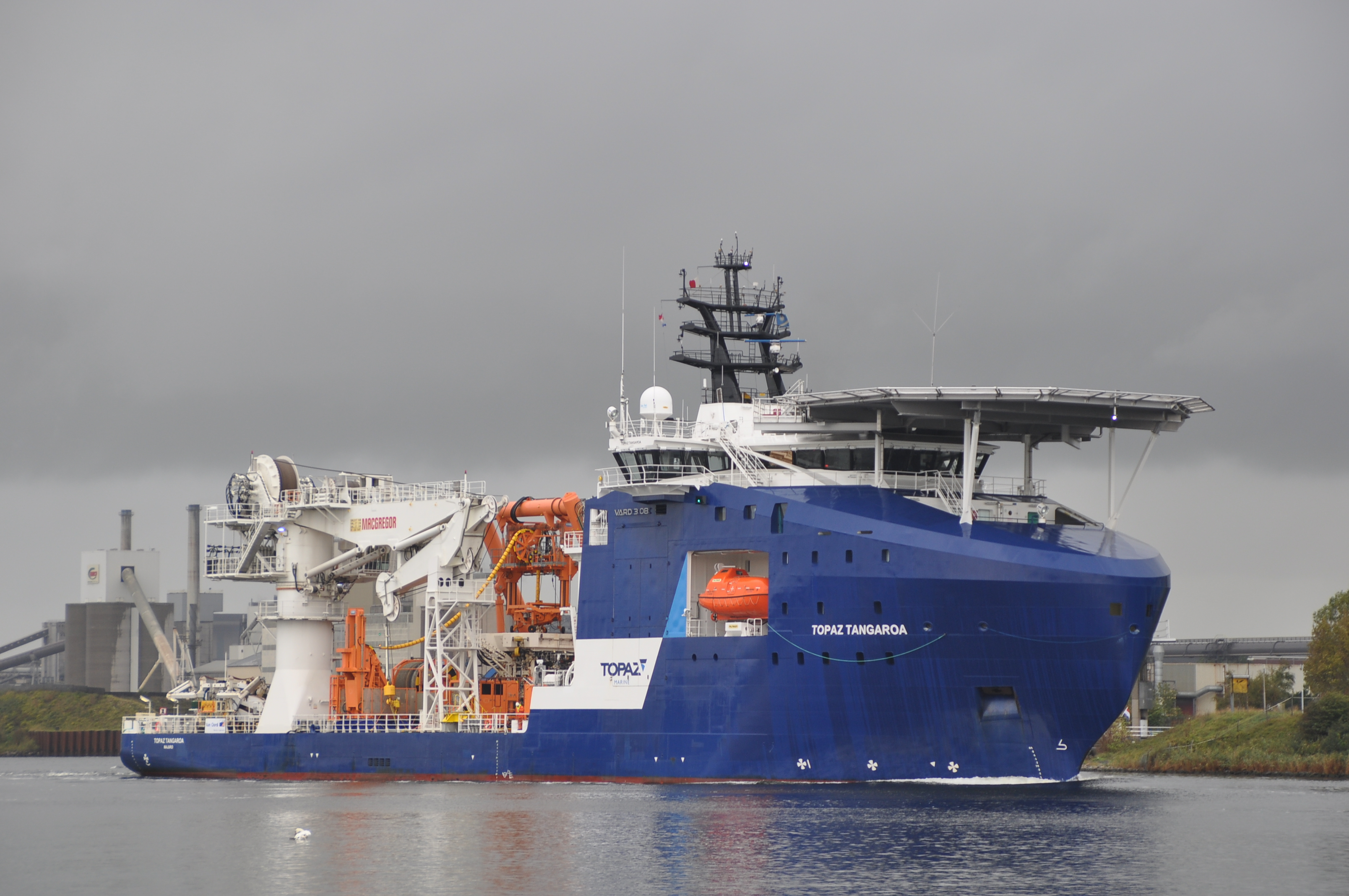 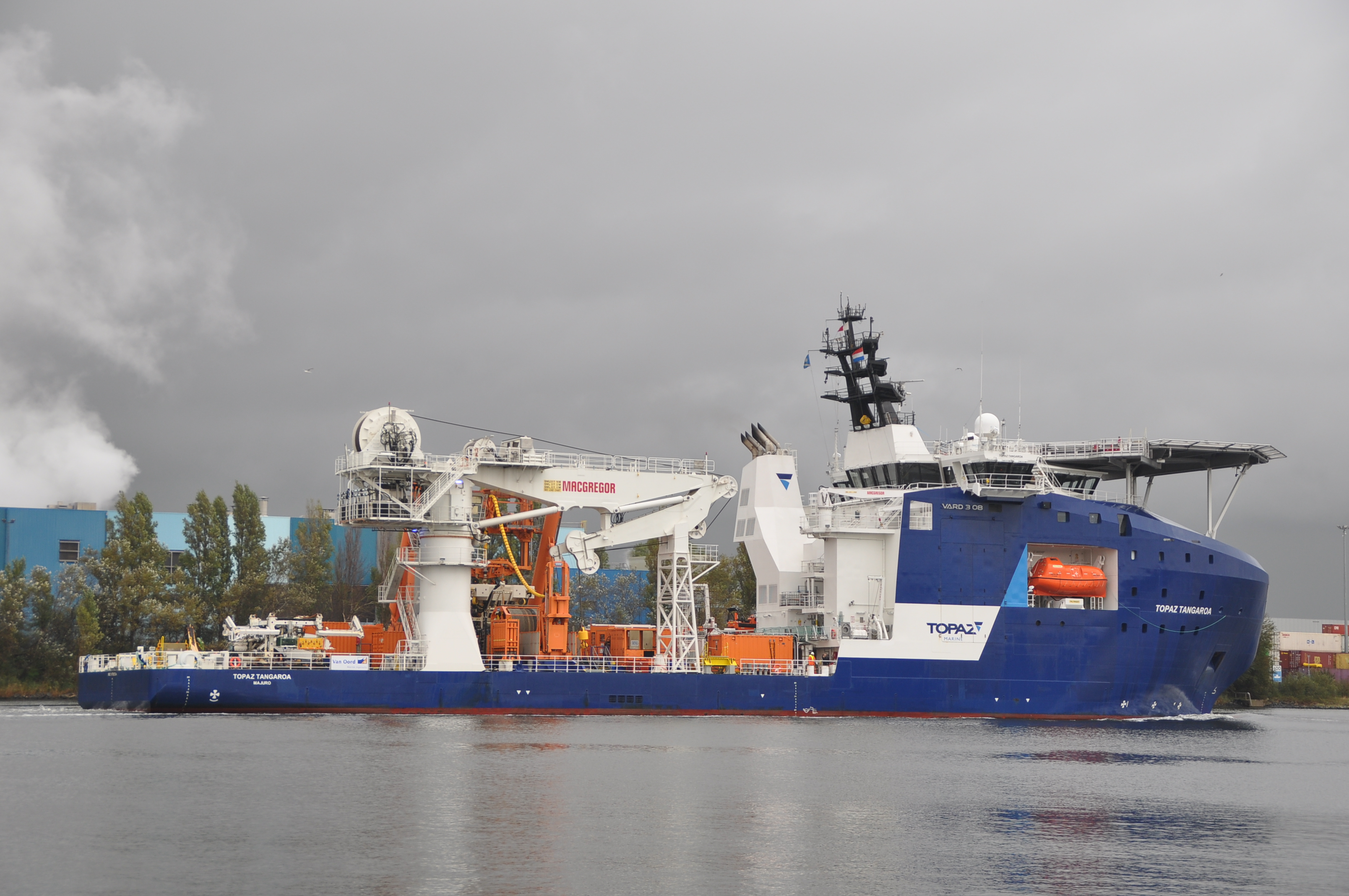